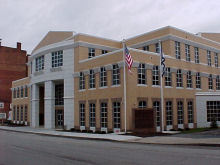 CLARKSBURG - A lawsuit against the Preston County Commission and the state Department of Natural Resources has been dismissed from federal court.

The Preston County Sheriff's Department, Deputy Thomas Mitter and Paul S. Ferguson were also named as defendants in the suit.

On Dec. 9, an order of dismissal was filed, stating that all claims against WVDNR and Ferguson have been settled and compromised.

On Dec. 3, 2011, Richard Paul Bolyard Jr. was deer hunting and shot a deer on or near property owned by Michael Kelly in Preston County, according to a complaint filed May 25, 2012, in Preston Circuit Court and removed to the U.S. District Court for the Northern District of West Virginia at Clarksburg on June 19, 2012.

Bolyard claimed he searched for the deer, but gave up around 2 p.m. because of another obligation. Later that evening, he went back out to look for the deer, he says.

Jonathan Atwood accompanied Bolyard during the search, and Bolyard did not take his gun with him and was completely unarmed when he went back out to look for the deer, according to the suit.

Bolyard claimed while in the woods, he noticed someone pulling in behind his truck, and the individuals got out of their vehicle and looked into his truck. He could not tell who they were and did not confront them, he says.

Eventually the individuals left and Bolyard went back down to his truck and drove home, which was approximately six miles from where he had parked his truck, at which time he noticed police lights coming toward him, according to the suit.

Bolyard claimed he was still sitting in his truck when the defendants arrived, and the defendants "exited their vehicle with guns drawn and ordered the plaintiff to exit his truck, ordering him to put his hands up and shooting profanities at him."

Shortly thereafter, the defendants threw the plaintiff to the ground, face down, with his hands and legs spread, and Mitter started kicking the plaintiff and pulling on his arm to the point that he broke Bolyard's arm and tore ligaments in his elbow, according to the suit.

Bolyard claimed the defendants ordered him to remain on the ground, despite being in tremendous pain, and told him if he got up, the defendants would turn their police dog loose on him.

Mitter and Ferguson jerked Bolyard up off the ground by his arms and slammed him against his truck, according to the suit.

Bolyard claimed the defendants wrote him citations for trespassing, hunting without permission and expired registration. No charges were brought against him for resisting arrest, obstructing an officer or any other crime that would warrant such brutal and excessive force.

Atwood witnessed everything that happened, according to the suit.

Bolyard was seeking compensatory damages with pre- and post-judgment interest. He was represented by Kevin T. Tipton of Tipton Law Offices.

The case was assigned to District Judge Irene M. Keeley.