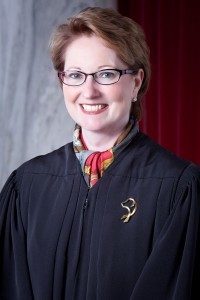 CHARLESTON – My fellow West Virginia Supreme Court Justices and I had the distinct pleasure of hosting Chief Justices and State Court Administrators from 47 states, several territories, and Washington, D.C., at The Greenbrier in July for a gathering focusing on elder law, a topic that has been a special interest of mine for many years.

About 72 million people are projected to be 65 years or older by 2030. “The Silver Tsunami: The Effects of an Aging Population on State Courts” was the topic of the Annual Meeting of the Conference of Chief Justices and Conference of State Court Administrators July 19-23.

Work sessions provided a plethora of useful information from national experts and elicited in-depth, insightful discussions. There was time, also, for us to show our guests and their families what West Virginia has to offer in the hope they might return here and encourage others in their home states to visit us, too.

Kathy Greenlee, the Administrator of the Administration for Community Living and Assistant Secretary for Aging in the U.S. Department of Health and Human Services, was the keynote speaker the first day, urging us to look at an “old” problem through a new lens, setting the stage for our discussions during the rest of the conference.

One education session focused on improving court responses to elder abuse and neglect, including financial exploitation. Such abuse is an underlying and sometimes hidden factor in court cases involving older persons. While every state has criminal statutes that apply to elder abuse, the cases present special challenges. The session included a presentation on the common misconceptions that can hinder the investigation, prosecution, and conviction of elder abuse incidents.

There was also a panel discussion on this topic featuring innovative court responses and national resources. The sad case of heiress and socialite Brooke Astor was the focus of another education session. Another education session, moderated by North Dakota Chief Justice Gerald W. VandeWalle (the oldest state Supreme Court Justice in the nation), focused on the demographic transition to an aging society, how longevity is associated with functional limitations and changes in capacity, and how courts are affected by this transformation.

The sensitive topic of judicial capacity and the roles of state judicial assistance programs also was explored. Another panel discussion examined the impetus for state-level reform of the adult guardianship/conservatorship system and how state justice systems have responded.

The Chief Justices and Court Administrators also spent time in their respective groups’ committees and plenary meetings. Former U.S. Supreme Court Justice Sandra Day O’Connor joined us one day to present the annual Sandra Day O’Connor Award for the Advancement of Civics Education. And there was time to recognize the State Justice Institute’s Thirtieth Anniversary.

The Greenbrier itself provided a bevy of activities to entertain the judicial officials’ families while we worked.

I feel fortunate to be Chief Justice when our state was able to host such an important conference. I would like to thank my fellow Justices, three of whom presided as Chief as plans were being made for the event these last four years. I appreciate so much the work of the entire Administrative Office staff, especially the management provided by Sara Thompson, the Court’s Director of Judicial Education and our de facto events manager.

The NCSC’s Shelley Rockwell, Brenda Williams, Toni Grainer, and – of course – its President, Mary McQueen, were absolutely invaluable. Finally, none of this would have been possible – from proposal to execution – without the leadership provided by our Administrative Director (and COSCA Board Member) Steve Canterbury.

Ultimately, I appreciate my fellow citizens who were their usual gracious, hospitable West Virginians. From my colleagues, who came as far away as Guam to the west and the Virgin Islands to the (south) east, I heard nothing but the highest praise and even a degree of astonishment at how indefatigably polite and hospitable and, as one termed it, “sweet” every person they met was to them.

Of course, I am not surprised.

Davis is Chief Justice of the West Virginia Supreme Court of Appeals.