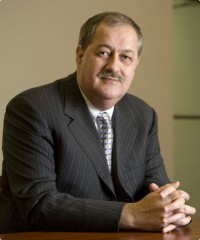 BECKLEY – Former Massey Energy CEO Don Blankenship pleaded not guilty Thursday to federal charges he was to blame for the April 2010 explosion at the Upper Big Branch Mine that killed 29 miners.

The indictment alleges that from about Jan. 1, 2008, through about April 9, 2010, Blankenship conspired to commit and cause routine, willful violations of mandatory federal mine safety and health standards at Massey’s Upper Big Branch mine in Raleigh County.

The indictment alleges that during this same period of time, Blankenship was part of a conspiracy to impede and hinder federal mine safety officials from carrying out their duties at Upper Big Branch by providing advance warning of federal mine safety inspection activities, so their underground operations could conceal and cover up safety violations that they routinely committed.

The indictment further alleges that after a major, fatal explosion occurred at Upper Big Branch on April 5, 2010, Blankenship made and caused to be made false statements and representations to the SEC concerning Massey’s safety practices prior to the explosion.

The 43-page indictment does not accuse Blankenship of causing the Upper Big Branch disaster, rather it says he conspired to commit violations of mine safety rules.

Also, the indictment alleges that, after this explosion, Blankenship made and caused to be made materially false statements and representations, as well as materially misleading omissions, in connection with the purchase and sale of Massey stock.

The FBI and the U.S. Department of Labor’s Office of Inspector General are in charge of the investigation.

Goodwin’s office has been investigating the Upper Big Branch explosion since 2010. He, Counsel to the U.S. Attorney Steven Ruby, and Assistant U.S. Attorney Gabriele Wohl are handling the prosecution.

The four counts charged carry a maximum combined penalty of 31 years’ imprisonment, according to Goodwin.

Last week, the day after the indictment was released, U.S. District Judge Irene Berger issued a gag order in the case, saying it was needed to avoid as much pre-trial publicity as possible so Blankenship could receive a trial by a “fair and impartial” jury.

Less than a year after the UBB disaster, Massey announced in December 2010 that Blankenship retired from Massey at the end of 2010, and Alpha Natural Resources bought Massey in January 2011.