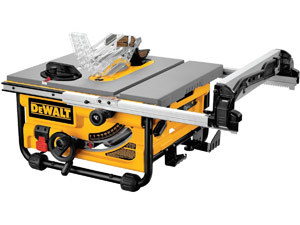 On Aug. 14, 2013, Matthew Baker, while working for his employer, Schoop Home Improvement, was operating a DeWalt saw with all due care to perform a dado cut and was severely injured when he sliced through four fingers almost completely, which resulted in nerve damage and permanent injury, according to a complaint initially filed Dec. 17 in Brooke Circuit Court and removed to federal court Jan. 16.

Baker claims Stanley Black & Decker Inc.; Black & Decker Corp.; Black & Decker (U.S.) Inc.; and DeWalt Industrial Tool Company sold and held out the saw as being able to safely perform a dado cut, however, the saw's design and/or its requirement that its blade guard must be removed while a user is performing a dado cut made the saw unreasonably dangerous to operate.

The defendants had a duty to test for, discover and eliminate hazards wherever possible first before utilizing a potentially dangerous product design, according to the suit.

Baker claims the defendants also had a duty to guard against and warn of potential dangers if it was not possible to first eliminate hazards through a safer alternative design.

In 2000, at a meeting of the Power Tool Institute Inc., the defendants were made aware of Sawtop technology that detects when human flesh touches the saw blade and, once contact is detected, stops the saw blade almost instantly, according to the suit.

Baker claims the defendants are negligent and breached its implied and express warranties.

Baker is seeking compensatory and punitive damages with pre-judgment interest. He is being represented by Eric T. Chaffin of Chaffin Luhana LLP.