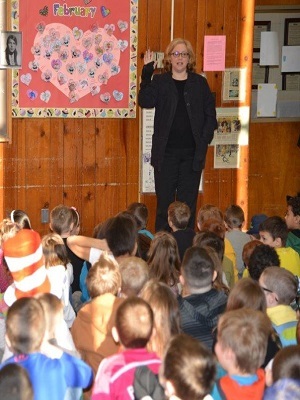 CHARLESTON – One should be very careful which Dr. Seuss book to read aloud, Kanawha County Magistrate Julie Yeager said during an interview in the lead up to her visit to a South Charleston school.

Yeager is in her 10th year administering the oath in area schools. During one visit, she recalled the teacher told her to pick any Dr. Seuss book to read aloud to the students. Yeager recalled she chose one at random and that she doesn't remember which one it was but that she soon realized she couldn't quite pick up the cadence.

"You have to wonder what he was thinking when he wrote it," she said with a laugh during an interview for The West Virginia Record interview. "I was so tongue twisted."

Yeager delivered the “Reader’s Oath” in honor of Dr. Seuss’ birthday at Montrose Elementary School in South Charleston. Yeager's appearance was part of Montrose Elementary's observance of "Read Across America Day", which is every year on or near the March 2 birthday of the late Theodor Seuss Geisel, known worldwide as "Dr. Seuss".

Yeager makes regular appearances in area schools, including high schools around prom and graduation seasons, but she said her favorite visits are when she administers the "Reader’s Oath" in honor of Dr. Seuss' birthday. The oath, written by Debra Angstead of Missouri and says in part:

"I promise to read Each day,

I know it’s the key

to growing up right."

"The kids just love it," Yeager said. "It's a wonderful opportunity to show them that you are human just like they are, that they can grow up to be anything they want to me and how important reading is to achieving their goals."

What she does with students and the "Reader's Oath" is similar to what she does on the job, Yeager said. "I explain to them that this is what I do for a living, that I administer oaths every day," she said.

Pairing the oath with Dr. Seuss' work is a natural connection, Yeager said. "Dr. Seuss had such a vibrant personality," she said. "He told them stories but he also told them life lessons in those stories."

Her favorite, she said, is "The Cat in the Hat".

However, Yeager recalled an occasion when one youngster wasn't so sure of that message, given the details of that particular story. "I was explaining that you have to always tell the truth, even if your mommy will think it's crazy," Yeager said. "And this little boy said, 'I don't think my mommy would believe that at all.' It was so precious."

Though such memories are delightful, reading is serious business, Yeager said. She pointed to studies that indicate daily reading nurtures the brain, which is very important for achieving life goals. "I tell them, you can be anything you want to be, if you're willing to work very hard," she said. "You can be a judge, you can be an author, anything, but you have to keep reading. Reading helps nurture your brain so you can grow up and be those things you want to be."

Yeager said she also reminds students they're under oath, they have to keep reading. "And I tell them, I'll be back next year, so make sure you're reading," she said.