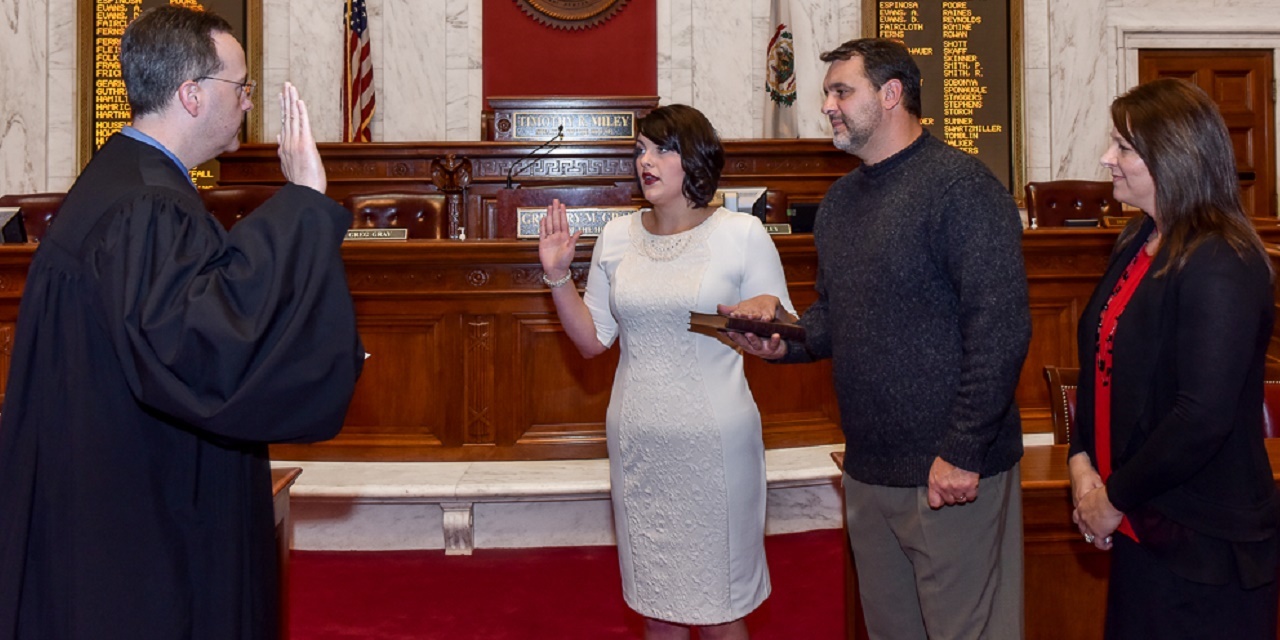 Kayla Kessinger is sworn in as a member of the West Virginia House of Delegates while her father Mike holds the Bible in this 2014 photo. Justice Allen Loughry swore her in, while her mother watches. (West Virginia Legislature photo)

CHARLESTON – State legislators always are hearing stories from constituents. They receive e-mails and phone calls about things people in their district want fixed or changed. They are cornered at restaurants and grocery stores, asked to support this measure or vote against another one.

Kayla Kessinger is no different.

Kessinger, a Republican member of the House of Delegates from Mount Hope, recently was told about a startup frack sand business that was having trouble getting insurance for its trucks. Before it finally was rectified, the snafu put the business owner a few months behind in launching his business.

This time, however, she knew the business owner very well. It was her father.

“It was an ordeal, a major process,” said Mike Kessinger, who recently did get Synergy Sand LLC off the ground. “We started in November. We had a great deal in place, and the insurance alone took us at least … Well, we started on Nov. 17. And we just now are getting things going.”

Mike Kessinger explained what Synergy Sand, which is based in Mount Hope, does.

“We haul frack sand for the industry,” he said. “Our main source client would be Halliburton. We got in on ground level, got the contract. We have a shop in Wheeling. We have an office in Claysville, Pa. We have a dispatch in Arlington, Texas.

“The frack sand is shipped in by rail, and brought into loading facilities in northern West Virginia, Ohio and Pennsylvania. On each well site, they have the silos. We load the sand at the facility and deliver it to the well site. The sand is stored in silo on site.

“As they frack, sand is a propping agent once they do the fracture of the shale. Once the frack is made, sand is piped in. That allows gas and other minerals to flow through and keeps the frack from healing.”

He said he expects eventually to have at least 50 employees.

“Those are salaries that are going to contribute to the local economy,” he said.

Mike Kessinger, who also is mayor of Mount Hope, said once he was ready to start the business, it was nonstop work. All things were in order until he tried to secure insurance for the company.

“Some of our problems were agent error,” he said. “For example, one guy was trying to do it underhandedly, not telling the whole story. Anyway, it came before National Indemnity, and they were hearing conflicting stories. So, they decided not to insure us.

“The guy I was working with there was familiar with the natural gas and oil industry. He’s out of Texas, and he probably has 50-60 clients who do what we do. He tried. His problem was that because of the tort liability in West Virginia, those underwriters didn’t want to take a risk in the state.

“It held us up four months. It was four months of anguish, frustration, worrying and wondering if we were even going to be able to get it done.”

He said that risk is the reason insurers are so hesitant about doing business in West Virginia.

He said Charles Biggs, an insurance agent in Oak Hill, was the one who finally got things together for Synergy Sand.

“Charlie and his son run the agency,” Mike Kessinger said. “He’s a friend of mine. He sells Erie Insurance, auto and home. But I didn’t know he did big trucks, too. Anyway, he heard about it and contacted me. He asked if he could take a stab at it. That was on Dec. 27. By Jan. 3, he had it written. Erie underwrote it, and we’ve now got a good thing going. We had our policy by Jan. 10.

“It took a person who had a personal interest in doing it. The average agent wouldn’t have put in the time and effort because of the liabilities.”

“It’s disappointing that West Virginia is a state that is so rich in natural resources, yet we create so many impediments to businesses,” Kayla Kessinger, an assistant majority whip, said. “And it’s not just my dad. I hear these stories all over the state. For example, Stat Oil pulled out because of the business climate. They decided it wasn’t beneficial for them to do business here. They couldn’t get permits in a timely manner, so they sold their resources in West Virginia

“We’ve done a lot in the last few years in terms of tort reform and making the business climate better, but we have a lot of room to grow. I don’t want to have the bare minimum when it comes to things like that. I want us to be the best.”

Kayla Kessinger, who has worked for her father's businesses through the years, said she has been talking to fellow delegates who are in the insurance industry about solutions to these problems.

“We need to put our heads together to make sure things are done, and done the right way,” she said.

“We’re all in this together,” he said. “Businesses, insurance agents, state government, regulatory agencies. We need to all work together to do something greater than any of us can do individually.

“I think the Legislature since 2014 has done a lot of work on these issues. We’ve seen some change, but we’ve got a lot more work to do. I think (Attorney General) Patrick Morrisey has helped businesses and has been more friendly toward businesses, and I think our Supreme Court justices have, too. We’ve seen a turn, but we still have a long way to go.”

Mike Kessinger, who worked in the coal industry for years, said businesses just need some help.

“It’s already tough enough to do business here, but it would make life a lot better for people like myself who are trying to create jobs, to make life better for myself and others around me, if we could have more cooperation,” he said. “It’s hard enough to manage and operate a business, but when on top of that you have to deal with the bureaucracy and all of the restraints that are built into our system, it’s overwhelming.

“You just rub your forehead, steal away for a moment and gather yourself. It’s a lot of responsibility. Now, it shouldn’t be the Wild West. We need standards and regulations. There should be a balance there. We are in a depression because of the loss of coal jobs. That can be directly traced back to these same issues. It’s just hard.”

Want to get notified whenever we write about West Virginia House of Delegates ?

Sign-up Next time we write about West Virginia House of Delegates, we'll email you a link to the story. You may edit your settings or unsubscribe at any time.