Bannon seems to be firmly seated on the Morrisey train

“I’ll tell you what Pat, this is the reason that, at Breitbart News, we love you, we love you on the show, and I’ll tell you why,” Bannon said. “It’s no flash, it’s all grind. You’re a grinder, but I’ll tell you one thing, when Morrisey says he’s going to get something done, it gets done. It’s blocking and tackling. And I’m telling you, I’ve told people this with Trump, it’s authenticity. 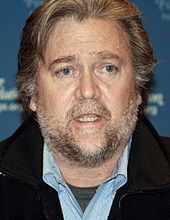 “People are tired of blow-dried politicians. They have their Frank Luntz-programmed words that work. They look like a product being marketed by Procter and Gamble. What they want is people that are authentic, that sit there like Pat Morrisey and say, ‘Hey, I’m going to do the following three things: Bang, bang, bang,’ and they get done. I mean, Pat, I think that’s why people admire you so much in West Virginia.”

Alos, The Hill website reported that Bannon is “all in” in supporting Morrisey in his primary against Congressman Evan Jenkins.

“Steve Bannon is a leader in the conservative movement and one of President Trump’s strongest supporters,” Morrisey campaign spokeswoman Nachama Soloveichik said in a statement. “When Steve Bannon speaks, people listen. Patrick has a proven track record of taking on Obama, defending coal and protecting West Virginia traditional values.

“If Steve Bannon wants to help spread Patrick’s conservative message, he can be a tremendous help and make a big impact on this race.”

“As public polling in this race has consistently shown, West Virginia Republicans aren’t buying Patrick Morrisey’s desperate attempts to whitewash the two decades he spent getting filthy rich as a Swamp insider and lobbyist,” Andy Sere told The West Virginia Record. “Morrisey may be D.C.’s candidate, but Evan Jenkins is West Virginia’s candidate — and it is West Virginians who will choose the Republican nominee for U.S. Senate.”