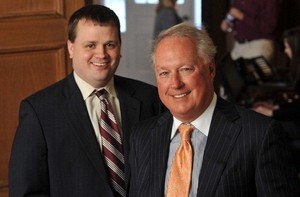 WHEELING – A judgment in a fraud lawsuit against Quicken Loans has only gotten bigger since an appeal to the state Supreme Court, so the company is heading back.

On July 17, Quicken Loans filed a notice of appeal to the state Supreme Court of a decision in Lourie Jefferson’s lawsuit against it that awarded her $3.5 million in punitive damages and more than $875,000 to attorneys at Bordas & Bordas in Wheeling.

In November, the Supreme Court found the company committed fraud and violated various provisions of the West Virginia Consumer Credit and Protection Act in a mortgage loan, but sent the case back to Ohio County Circuit Court to adjust an approximately $2.8 million award.

On June 18, Ohio Circuit Judge David J. Sims, who took over the case from Arthur Recht, awarded Jefferson even more. In an appeal brief, the company called the punitive damages award “grossly excessive.”

“Quicken Loans essentially argues that this was a complex case, that the Plaintiffs’ evidence was weak, and that Quicken Loans was, for the most part, right in this matter and that, therefore, a punitive damages award against it is not warranted,” Sims wrote.

“This Court disagrees. Based upon Judge Recht’s rulings and the subsequent decision in Quicken Loans, it is apparent that Quicken Loans did not accurately evaluate the egregiousness of its conduct, its potential liability, and the potential for a large damages award against it.”

Jefferson, whose last name was Brown at the time she filed the lawsuit, responded in May 2006 to a “pop-up” advertisement on her computer and completed an on-line application in “an effort to consolidate her debt and lower her monthly payments.”

Quicken Loans contacted her and she began to deal with mortgage banker Heidi Johnson.

Quicken ordered an appraisal of the home that Jefferson was interested in refinancing and the appraisal request included an estimated value of the subject property of $262,500. The trial court would later conclude the value of the property was $46,000.

Appraiser Dewey Guida of Appraisals Unlimited, Inc. valued the property at $181,700 and after Jefferson backed out of the process for a few weeks because of her concern that she would be unable to afford the payments, Johnson was able to close her on a $144,800 loan.

Although Jefferson had initially received a written Good Faith Estimate for a loan in the amount of $112.850 with a 2.5 “loan discount points” and no balloon feature, this much larger loan actually charged her for 4.0 points, while only giving her 2.5, and had a balloon payment after 30 years of $107,015.71, the amount of which was not disclosed, according to court documents.

After the loan finalized, Jefferson made two payments and then began calling Quicken to “begin the refinancing process” as she alleged she had been promised. Quicken refused to refinance the loan, according to court documents.

In early 2007, after missing work due to health problems requiring multiple surgeries, Jefferson defaulted on the loan and was unable to work out a payment arrangement with Quicken. In August 2007, she provided statutory notice to Quicken of a claim but Quicken did not offer to “cure” her complaint and, instead, began foreclosure proceedings, court documents show.

Jefferson filed suit in the Circuit Court of Ohio County naming Quicken, Appraisals Unlimited, Inc. and Dewey Guida, alleging she was the victim of “a predatory lending scheme and consumer fraud relating to the loan at issue.”

Prior to trial, Brown settled with Guida and Appraisals Unlimited for $700,000.

The state Supreme Court ruled for Quicken Loans in its argument that the amount of compensatory damages awarded against the company should have been offset by the settlement.

In 2011, Recht took the total of amount of compensatory damages, attorneys fees and costs and multiplied by three to arrive at a $2.1 million punitive damages issue. The Supreme Court upheld that fees and costs should be included in the ratio.

After the decision, the company complained that the plaintiff had been awarded $3.7 million in damages over a $145,000 mortgage. It also said it expected the circuit court’s continued review of the case to find the award was irrational and out of line.

Instead, Sims used an even larger ratio to arrive at his punitive damages award – approximately 3.5 times the compensatory damages, fees and cost.

Quicken received a full credit for the compensatory damages award by virtue of the settlements Jefferson received with other defendants.

Sims wrote that the company has and still has an opportunity to settle, but has chosen to fully litigate the issue, as is its right.

“However, it can not now complain that it was somehow ‘vindicated’ and, therefore, should not be subject to a punitive damages award,” Sims wrote.

“Quicken Loans proceeded in this matter, at its own peril, when others reached compromises, with full knowledge of the consequences should it not prevail.

“Quicken Loans did not prevail and must now face the music.”

Jim Bordas, attorney for Jefferson, said his firm is still open to a settlement.

“We’ve been trying from the get-go to negotiate a settlement with Quicken,” he said. “And Quicken won’t hear anything of it. You’d think at some point in time Quicken would get it.

“Quicken has no interest in recognizing the misconduct they’ve been found guilty of – the outrageous conduct – by all the judges involved and coming to the bargaining table and resolving this thing.

“Even to this day, we would be willing to talk to them about a settlement.”

-The punitive damages award was grossly excessive and deprived it of substantive due process;

-Sims failed to obey the mandate of the Supreme Court that neither law nor equity permitted cancellation of Jefferson’s debt;

-Sims failed to obey the mandate of the Supreme Court that the law does not favor forfeitures;

-Sims failed to obey the mandates of the Supreme Court that attorneys fees awarded pursuant to the WVCCPA are compensatory damages and the company is entitled to an offset of the full amount ($700,000) of the prior settlement;

-Sims failed to obey the mandate of the Supreme Court that implicitly rejected the plaintiffs’ request for an award of fees and costs on appeal and the directions that each party would bear its own costs;

-Sims’ award of attorneys fees was an abuse of discretion because it accepted without scrutiny time records that were vague, reconstructed and in some instances inscrutable;

-Sims acted contrary to law, justice and Quicken Loans’ right to due process by increasing the amount of punitive damages on remand when the only intervening event was a lawful appeal;

-Sims deprived Quicken Loans of its right to due process by basing his reprehensibility finding on conduct dissimilar from that upon which liability for punitive damages was premised, as well as on harm or potential harm to persons other than the plaintiff.

“(Jefferson) made two timely payments and defaulted. Today she possesses a judgment against Quicken Loans for approximately $4.5 million, as well as the proceeds of a $700,000 settlement with a former co-defendant, subject to a minor offset – in other words, over $5 million (with interest accumulating).

“And she need not pay back the loan, either. All in a case involving no physical injury to anyone, and in which Plaintiffs dropped their claim for intentional infliction of emotional distress.

“How could our judicial system produce this astonishing result?”

"Quicken Loans approved Ms. Lourie Brown’s application for a $144,800 mortgage based, in part, on the professional opinion of a licensed West Virginia appraiser who had no affiliation with Quicken Loans. In the circuit court’s flawed opinion, for this, Quicken Loans should pay Ms. Brown $3.5 million in punitive damages and nearly $1 million in attorney fees and costs. This decision defies all sense of what is fair and right.

"Quicken Loans does not consider the court’s grossly disproportionate award of punitive damages to be consistent with the law. QL will appeal this decision to the state appeals court, and ultimately to the U.S. Supreme Court, if necessary, and expects justice to prevail."

Jefferson has a separate lawsuit in Ohio Circuit Court pending against Quicken Loans that alleges the company violated debt collection laws by contacting her after being notified she was represented by counsel.

In both cases, she is represented by Bordas & Bordas. According to Sims’ decision, the bulk of the work has been performed by Jason E. Causey.

Bordas said the case is an example of the importance of the contingent fee system that has allowed Jefferson and her daughter to afford representation in the case as it proceeds.

“After a while, enough’s enough,” he said. “I wonder if the Supreme Court is gonna say the same thing.”