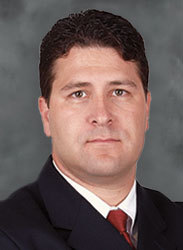 CHARLESTON - A Fayette County woman is suing Charleston Area Medical Center Inc. after she claims her employment was wrongfully terminated.

Kim Irving was also named as a defendant in the suit.

Cynthia Morris was hired by CAMC Federal Credit Union in May 2000 to work in the accounting department and in October 2008, her position changed to Assistant to the Member Services Supervisor, according to a complaint filed Oct. 25 in Kanawha Circuit Court.

Morris claims on Nov. 13, she left work early on a mini-vacation and before leaving work, she counted the contents of the vault by strap, like she always did. The money in the vault balanced and she did not undo the straps to count the money, nor did any other employees recount the money, she says.

After this, Morris gave the vault books to Irving, who did not verify the vault amount, even though she was taking over the vault in Morris' absence, according to the suit.

Morris claims she returned to work on Nov. 19 and was approached by CEO Ashley Meek, who advised her that her drawer was going to be audited. Morris took her drawer to the boardroom, where Meek, David Dorsey and Bob Miller, a security guard, were present, the complaint says.

When Morris arrived in the boardroom, she asked Meek if something was going on and was told they were conducting surprise audits, according to the suit.

Morris claims after her drawer was audited, Meek told her everything was fine and then asked her some questions, including how confident she was about the amount of money she claimed was in the vault on Nov. 13.

Meek informed Morris that the vault was balanced on Nov. 14, and that it did not have the same amount of money in it that Morris had claimed, according to the suit.

Morris claims Dorsey began questing her about her personal accounts and asked her why the amounts were so low and if she had to borrow money from her daughter.

Morris claim she was then informed she was being suspended without pay and on Nov. 28, she received a telephone call from Meek, informing her they had more questions to ask her.

Upon arriving at CAMC, Morris was taken to the boardroom, where Meek, Irving, Dorsey, Miller and another security guard, called P.J., were present, according to the suit.

Morris claims she was asked why she had not broken down the straps in the vault and counted the money, which she explained that she had no reason to do so because she had never done that before while counting the vault.

After this, Morris' employment was terminated for not maintaining the vault, according to the suit.

Morris claims she was wrongfully terminated from her employment.

Morris is seeking compensatory and punitive damages. She is being represented by Anthony M. Salvatore and Amy A. Osgood of Hewitt & Salvatore PLLC.

The case has been assigned to Circuit Judge Paul Zakaib Jr.