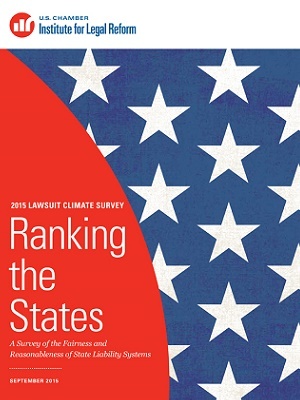 The survey, released by the U.S. Chamber Institute for Legal Reform, has the Mountain State in the bottom four states in each of the categories listed. The survey – 2015 Lawsuit Climate Survey: Ranking the States – was conducted by the Harris Poll of attorneys at U.S. companies.

West Virginia ranked no better than 47th in any of the category rankings. They are:

According to the study, 75 percent of senior company attorneys surveyed say that a state’s lawsuit environment is likely to impact important business decisions at their company, including where to locate or expand. That is an 18 percent increase from eight years ago, and an all-time high, the ILR states in a release. (Editor's note: The West Virginia Record is owned by the U.S. Chamber Institute for Legal Reform).

Participants in the ILR survey were comprised of a national sample of 1,203 in-house general counsel, senior litigators or attorneys, and other senior executives at companies with at least $100 million in annual revenues.

The survey found that several large states, such as California and Illinois, have some of the worst legal climates in the country for businesses, with rankings of 47 and 48, respectively. Delaware ranked at the top. West Virginia has ranked 50th in the survey since 2006. From 2002 to 2005, it ranked 49th.

“More business leaders than ever have identified a state’s lawsuit climate as a significant factor in determining their growth and expansion plans,” ILR President Lisa A. Rickard said in a statement. “States ought to take notice that a good lawsuit climate is vital to their continued job growth.”

Rickard and the president of the West Virginia Chamber of Commerce, however, see a brighter future for West Virginia’s legal climate. In an op-ed piece, Rickard and Steve Roberts say the Mountain State is “writing a new volume, and the early reviews are very promising.”

“We suspect that this week’s release of the U.S. Chamber Institute for Legal Reform’s survey of the 50 state lawsuit climates, which finds West Virginia ranked 50th as it has for the past decade, could be the last chapter of the old book,” Rickard and Roberts note. “The 2015 Lawsuit Climate Survey was being completed just as the West Virginia Legislature and Gov. Earl Ray Tomblin were deciding that enough was enough, and it was time to dramatically improve the state’s litigation environment.”

They note the legal reforms passed during this past legislative session, including joint and several liability reforms that “give businesses and individuals in West Virginia confidence that they will not be held liable for more than their fair share of financial responsibility in a lawsuit,” a new cap on punitive damage awards and asbestos bankruptcy trust transparency reforms.

“The robust collection of legal reform measures enacted this spring is perhaps the strongest and quickest turnaround imaginable,” Rickard and Roberts write. “Partly this is due to the tidal wave of change that has swept over the state. For more than a decade, the plaintiffs’ lawyers in West Virginia had a stranglehold on the levers of power.”

They said the reforms begin the process of real repair to the state’s reputation and starts to build a state that is “open for business” in truth, not just a slogan on billboards. But, they still say the state needs to create an intermediate court of appeals.

“West Virginia is one of only two states without an appeals court,” they write. “This would ensure that justice is always double-checked and would ameliorate the headwind currently created by the West Virginia Supreme Court, as it tends to issue outlier rulings.”

Rickard and Roberts also say the Legislature needs to reform medical liability laws to ensure damage awards are commensurate with actual medical costs incurred and that non-negligent parties are protected.

The executive director of West Virginia Citizens Against Lawsuit Abuse echoed their sentiments.

“While this survey was conducted before the 2015 lawsuit reforms became law, it underscores how West Virginia’s lawsuit system is viewed poorly by job creators and employers who are knowledgeable of and have had firsthand experience with our court system," WV CALA's Roman Stauffer said in a statement. "The recent reforms will help ensure a fair and impartial legal system, and there is still more to be done.

“The lawsuit reforms that our Legislature recently passed have just become law. These reforms will go a long way in improving the negative perception of our state’s legal system. There are additional reforms, like the creation of an intermediate court of appeals, that will bring our state more in line with other states and help ensure all litigants have a fair and impartial day in court. WV CALA members are looking to legislative leaders to continue to do good work in addressing problems in our state’s civil justice system during their next session."

The president of the West Virginia Association for Justice, however, condemned the release as "nothing more than propaganda designed for one purpose – to scare West Virginia voters into giving up their constitutional right to trial by jury and provide total immunity for corporations who break the law."

"This so-called study isn't news," WVAJ President Paige Flanigan said. "It's business as usual from the so-called Institute for Legal Reform. Its methodology has been widely discredited by academics, the media and even its own authors for more than 10 years. This study is not an accurate analysis of West Virginia's legal climate."

Flanigan questioned how the survey is conducted.

"To survey only corporate defendants and their lawyers and release it as a legitimate analysis of a state's legal system is asinine," she said. "That's like surveying people at Mylan Puskar Stadium about which team they want to win the game, refusing to ask anyone wearing blue and gold and then announcing that fans want the visiting team to win.

"If this Chamber bunch wants to improve our state business climate and bring new jobs, why is it pushing this propaganda as fact instead of telling prospective businesses the truth about our legal and economic climate? It's not the state's legal climate that's costing us new jobs. It's the Chamber itself."

The ILR released the 2015 Lawsuit Climate Survey at a press conference featuring Illinois Gov. Bruce Rauner, and business and civil justice reform groups from across the state. The ILR says Illinois’ legal environment has worsened in recent years, hitting an all-time low in this year’s survey as the third-worst state nationally. More than a third of the survey respondents identified either Chicago/Cook County, or Madison County, Illinois as the city or county court with the “least fair and reasonable litigation environment for both defendants and plaintiffs” nationwide.

In tandem with the survey, ILR also released 101 Ways to Improve State Legal Systems, listing key legal reforms that states can adopt to improve their lawsuit climates. ILR also launched a national media campaign to raise awareness about the importance of a fair and balanced lawsuit system.

Harris Poll, a global polling firm, conducted the 2015 Lawsuit Climate Survey through telephone and online interviews between March 9 and June 24, 2015. The respondents were more than 1,200 general counsels and senior attorneys or leaders in companies with annual revenues of at least $100 million.

To see the entire 50-state list and to read a full copy of the 2015 Lawsuit Climate Survey online, visit www.instituteforlegalreform.com/states.