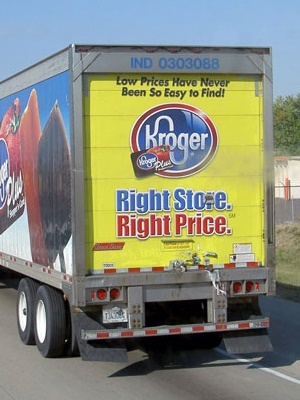 CHARLESTON – A Kanawha County woman is suing Kroger after she claims it is responsible for a collision that caused her injuries.

On July 31, Andrea C. Smith was traveling in a 2003 Subaru Legacy and was lawfully and properly stopped on U.S. 119 near Lucado Road in Charleston when Allen, who was operating a 2014 Freightliner Fleet Truck Tractor Trailer rear-ended Smith, according to a complaint filed in Kanawha Circuit Court.

Smith claims Kroger and Ruan were the owners of the freightliner that Allen was operating.

Allen failed to maintain control of the vehicle and failed to keep a proper lookout, was following too closely and struck Smith’s vehicle, causing damages.

The defendants’ actions caused Smith to be severely injured, according to the suit.

Smith claims Allen was working within the scope of his employment with Kroger at the time of the collision and Kroger was responsible for its employees’ actions.

The defendants were negligent and caused Smith’s damages, according to the suit.

Smith is seeking compensatory and punitive damages with pre- and post-judgment interest. She is being represented by Douglas A. Spencer of C. Michael Bee of Hill, Peterson, Carper, Bee & Deitzler PLLC; and Mark A. Hunt of Mark A. Hunt & Associates PLLC.