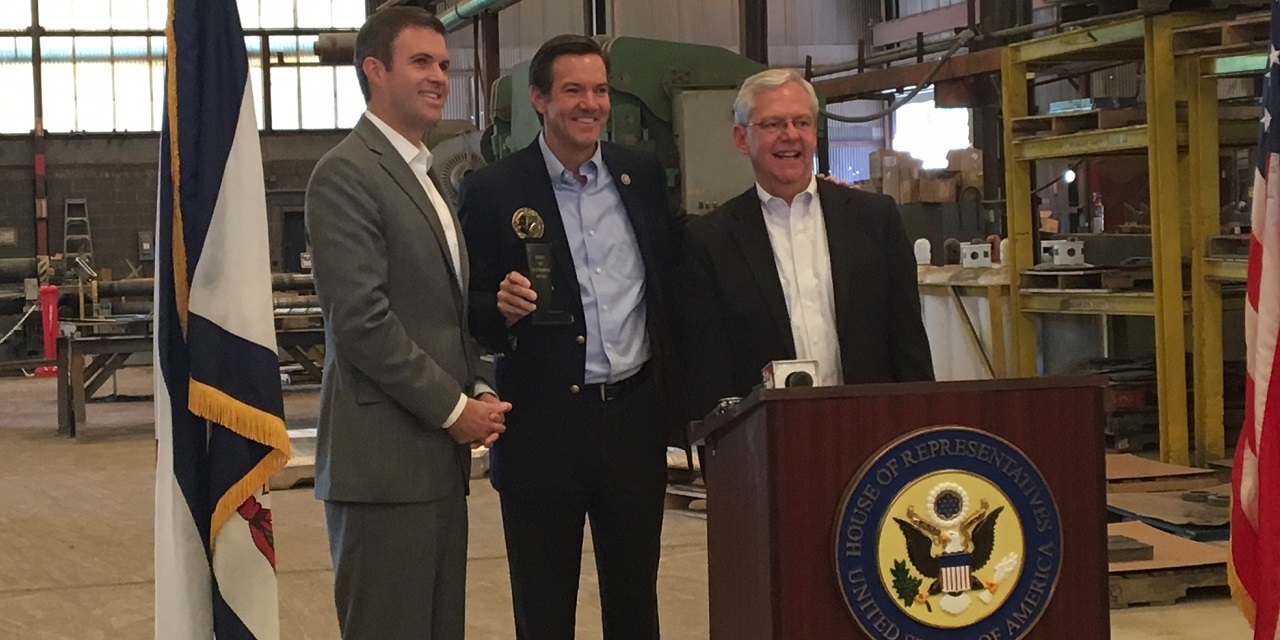 HUNTINGTON – The Huntington Regional Chamber of Commerce presented its Spirit of Enterprise Award to Congressman Evan Jenkins on June 1 at Huntington Steel & Supply.

Bill Bissett, president and CEO of Huntington Regional Chamber of Commerce, said it was important for the award to be presented at Huntington Steel & Supply, instead of in a conference room, because of the importance of steel workers.

“Dirty hands and muddy boots are what built this country,” Bissett said.

Steve Roberts, president of the West Virginia Chamber of Commerce, said steelworkers are a valuable part of the workforce.

“We value what you do and we value your business,” he said. “You are the fabric of our country.”

For 52 years, the Chamber has awarded the Spirit of Enterprise Award to the best of the best, said U.S. Chamber of Commerce Senior Vice President Rob Engstrom.

Jenkins said a good job solves a lot of problems and West Virginia workers and Huntington workers are important.

“Our workers have built this country,” he said. “We just want a fair shake — a level playing field. You shouldn’t have to get an award for doing the right thing in helping.”

Jenkins thanked all the steel workers for their hard work and brought them up to be recognized.

“The Spirit of Enterprise is really the spirit of West Virginia workers,” he said.

Jenkins is in his second term in the House. He announced earlier this month his candidacy for Senate in West Virginia for 2018.

When questioned, Jenkins said it would not be surprised to see other Republicans enter the race against him in the primary.

“It’s the beauty of democracy,” he said. “I wouldn’t be surprised. It’s a great opportunity.”

Currently, Sen. Joe Manchin won the senate seat in a 2010 special election after the death of Robert C. Byrd. He won his first full term in 2012 with 61 percent of the vote.

Editor's Note: The West Virginia Record is owned by the U.S. Chamber's Institute for Legal Reform.