CHARLESTON – U.S. District Judge Joseph Goodwin shocked all involved in a criminal proceeding by rejecting an alleged drug dealer’s single count of distribution in favor of having him face a jury trial.

Goodwin, who joined the court in 1995 after being nominated by President Bill Clinton, wrote in his order that it is the court’s function to prevent the transfer of criminal adjudications from the public arena to the prosecutor’s office for the purpose of expediency at the price of confidence in and effectiveness of the criminal justice system.

“The community of the Southern District of West Virginia must not be systemically excluded from its proper place in this participatory democracy, especially with regard to the heroin and opioid crisis,” Goodwin wrote in the June 26 order. “Because I find that the plea agreement proffered in this case is not in the public interest, I reject it.” 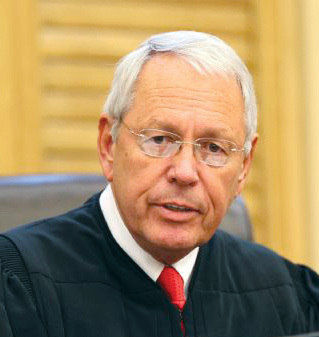 As the opiod epidemic continues to ravage West Virginia, Goodwin has chosen to have Charles York Walker face a jury trial, which “deters crime, enhances respect for the law, educates the public and reinforces their sense of safety much more than a contract entered into in the shadows of a private meeting in the prosecutor’s office.”

“The law is the law, and I am satisfied that enforcing the law through public adjudications focuses attention on the heroin and opioid crisis,” Goodwin wrote. “The jury trial reveals the dark details of drug distribution and abuse to the community in a way that a plea bargained guilty plea cannot. A jury trial tells a story. The jury members listening to the evidence come away with personally impactful information about the deadly and desperate heroin and opioid crisis existing in their community.”

Goodwin wrote that the jury members are educated in the process of performing their civic duty and are likely to communicate their experience in the courtroom to family members and friends.

“Moreover, the attendant media attention that a jury trial occasions communicates to the community that such conduct is unlawful and that the law is upheld and enforced,” he wrote. “The communication of a threat of severe punishment acts as an effective deterrent. As with other criminalized conduct, the shame of a public conviction and prison sentence specifically deters the sentenced convict from committing the crime again—at least for so long as he is imprisoned.”

Over time, jury verdicts involving the distribution of heroin and opioids reinforce condemnation of the conduct by the public at large, he wrote. In turn, respect for the law propagates. This respect for the law may eventually reduce such criminal conduct.

“Judge Goodwin is a superb judge,” said Harry Bell of the Bell Law Firm. “He has a great deal of trial experience and recognizes the importance of a jury trial in both civil and criminal cases.”

Bell said Goodwin always taught the importance of jury trials and the need to try cases that are in the public interest.

In 2012, West Virginia’s then-Attorney General Darrell McGraw filed a lawsuit against various drug wholesalers on behalf of the state, claiming they flooded the state from 2007 to 2012 with highly addictive painkillers. The lawsuit was settled for approximately $47 million earlier this year.

Multiple towns, cities and county commissions across the state of since filed lawsuits against the distributors for the drug problem across the state. Various doctors, the West Virginia Board of Pharmacy and others were also named in the separate lawsuits. Most of them have been removed to federal court, but some still reside in state court.

The drug wholesalers played a significant role in creating what amounts to a public nuisance by flooding the area with excessive amounts of dangerous and addictive medications. Their actions are a serious breach of the public trust, which has resulted in drug abuse, misuse, overdose deaths and untold expenses for the cities, towns and counties.

The wholesalers bore a significant duty to ensure that the drugs did not end up in the wrong hands and failed to do so.