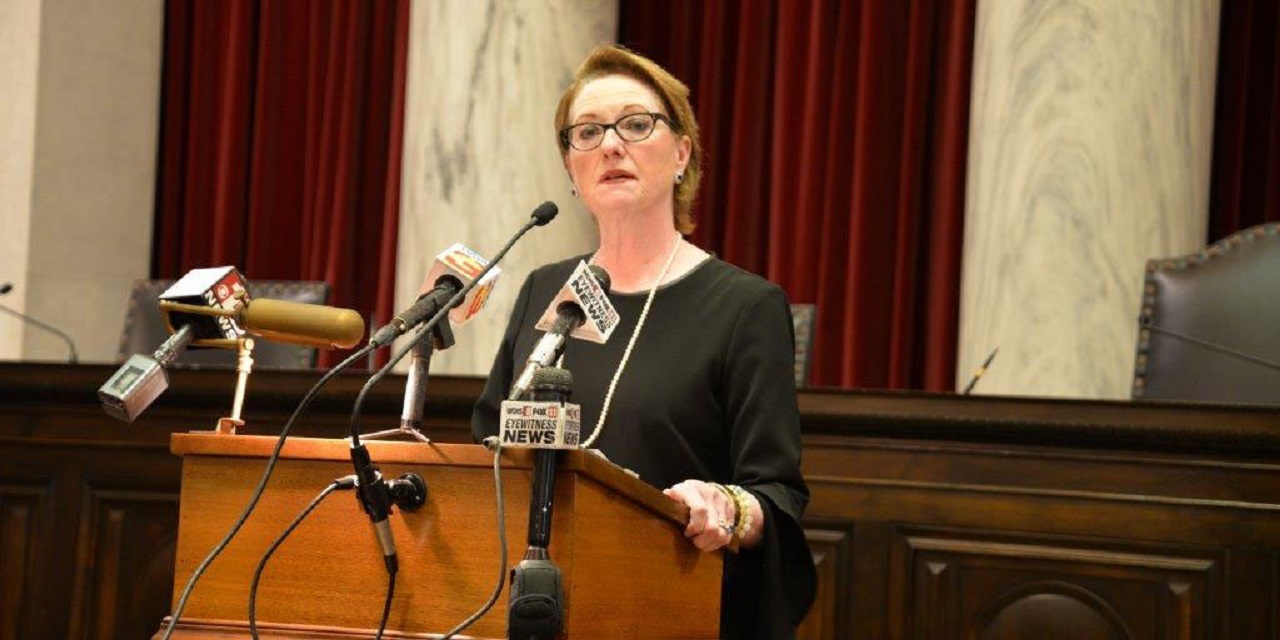 On Oct. 15, Cabell Circuit Judge Paul Farrell, who is the president judge in the impeachment trials in the state Senate for four current, former and suspended Supreme Court justices, issued an order granting a motion Davis filed Oct. 12.

Davis filed her motion a day after the state Supreme Court issued a 5-0 ruling saying the three Articles of Impeachment that name Chief Justice Margaret Workman violate the separation of powers doctrine. It ruled the state Senate also does not have jurisdiction over the claims made in those three articles.

Davis “was impeached following the same procedure and on most of the same grounds returned against Justice Workman,” Davis’s motion stated. “Furthermore, the same separation of powers, due process and procedural flaws identified by the court in the Workman decision are applicable to and controlling in the pending impeachment trial of retired Justice Davis.”

The Workman opinion was a 5-0 ruling, with two acting justices filing a separate opinion dissenting on a few points.

In the Oct. 15 Davis order, Farrell also noted that Davis had new counsel of record and that those attorneys needed time to “review the voluminous record” in the case. DiPiero and Simmons recently joined Davis’s legal team, replacing Robert Allen and Pamela Deem of Kay Casto & Chaney.

In her motion, Davis had noted the similarities between her case and Workman’s case.

“Retired Justice Robin J. Davis was impeached following the same procedure and on most of the same grounds returned against Justice Workman,” it said. “Furthermore; the same separation of powers; due process; and procedural laws identified by the Court in the Workman decision are applicable to and controlling in the pending impeachment trial of retired Justice Davis.”

The impeachment trial for Davis was scheduled to begin Oct. 29.

Davis retired Aug. 13, the same day the House of Delegates passed 11 articles of impeachment against her and the other members of the court. During a press conference the next day, Davis was critical of the impeachment process, calling it political. She said she resigned then so voters could elect someone to her seat rather than have Gov. Jim Justice make a permanent appointment.

“What we are witnessing is a disaster for the rule of law, the foundation of our state, and indeed, our very society,” Davis said. “For when a legislative body attempts to dismantle a separate branch of government, the immediate effects, as well as the precedent it sets for the future, can only be termed disastrous.”

Earlier this month, during a pretrial hearing in the Senate, a majority of senators voted down a motion that would have dismissed Davis from impeachment trial. The motion was rejected on a 15-19 vote. The vote was not along party lines.

Last month, Davis filed a lawsuit in federal court to stop her impeachment. And even though Davis has resigned, impeachment might prevent her from running for office again and collecting her state pension.

The court’s Workman opinion was a 5-0 ruling, with two acting justices filing a separate opinion dissenting on a few points.

"In addition, we have determined that the failure to set out findings of fact, and to pass a resolution adopting the Articles of Impeachment violated due process principles," the Workman opinion states. "Consequently, the respondents (the state Senate) are prohibited from proceeding against the petitioner (Workman) for the conduct alleged in Article IV and Article VI, and in Article XIV as drafted."

Those articles focus on the payment of senior-status judges and claims Workman and the other justices failed to implement administrative policies and procedures.

The writ essentially says the legislative branch does not have the power to prosecute members of the judicial branch and that a state law setting a cap on payments to senior-status judges is illegal. It says the state Judicial Investigation Commission handles judicial complaints.

It also says lawmakers didn’t properly follow the due process clause because they failed to formally adopt an impeachment resolution. It says because the House didn’t follow proper procedure, all of the articles of impeachment are invalid.

“This case is not about whether or not a justice of the Supreme Court of Appeals of West Virginia can or should be impeached; but rather it is about the fact that to do so, it must be done correctly and constitutionally with due process,” Thursday’s writ stated.

Matish also wrote that procedural safeguards built into the impeachment process have not been followed.

“In this case, there has been a rush to judgment to get to a certain point without following all of the necessary rules,” he wrote. “We are a nation of laws and not of men, and the rule of law must be followed. By the same token, the separation of powers doctrine works six ways. The Courts may not be involved in legislative or executive acts. The Executive may not interfere with judicial or legislative acts.

“So the Legislature should not be dealing with the Code of Judicial Conduct, which authority is limited to the Supreme Court of Appeals.

“The greatest fear we should have in this country today is ourselves. If we do not stop the infighting, work together, and follow the rules; if we do not use social media for good rather than use it to destroy; then in the process, we will destroy ourselves.”

Marc Williams, who is representing Workman in the matter, called the ruling “an overwhelming victory” for Workman.

“It’s very detailed, and it’s clear the court spent a significant amount of time on the issue,” he told The West Virginia Record. “The fact is that the impeachment process was flawed from the beginning. And now, rules have to be followed, especially if you’re dealing with something as important as impeachment.

“The court, as constituted, has spoken. It’s a fundamental principle of our republic that orders are followed when they’re issued by courts. If orders aren’t followed, then that will create a constitutional crisis greater than anything they could have projected.”

Still, Williams said he thinks the chance of the U.S. Supreme Court hearing the state Senate’s appeal is small.

“This was a flawed process from the beginning,” he said. “The House had adopted rules intended to protect the due process rights of the defendants. Then, for whatever reasons, they didn’t follow those rules. The opinion says their failure to follow their own rules is a failure of due process.

“The bottom line is that when a court issues an order, you comply with it. You don’t have to agree with it, but you comply. We can’t just decide which ones we follow.”

In their separate opinion, Bloom and Reger say the Legislature has “absolute discretion” to seek to re-impeach Workman against based on the maladministration allegations in Article XIV. They also said the court should have heard oral arguments in the case despite the fact the Senate waived the right to them.

“Many of the issues presented are related to transparency,” Bloom and Reger wrote. “Not having oral argument eliminates the opportunity for a more thoughtful discussion with the parties and perhaps greater illumination of the issues for the court.

“Also in a case both constitutionally and politically charged, transparency better serves the parties, the court and the public interest.”

“There are serious problems with the impeachment process that need to be addressed in a court of law, not in a political setting,” Williams previously told The West Virginia Record.

Workman’s petition also said the Articles violate her constitutional right to due process by failing to afford her adequate due process because she received no specific notice of the charges asserted against her and by posing a “substantial risk of erroneously depriving” her of her pension rights because the House “knowingly ignored the procedures it adopted to govern the impeachment process when attempting to adopt its flawed Articles of Impeachment.”

Workman also maintained the Articles violate the state constitutional precedent for appointment of senior status judges. And, she says the House never voted on the resolution authorizing the Articles of Impeachment, making the Senate trial illegitimate and unconstitutional.

“This cannot stand. This court must order the Senate to halt proceedings that undermine the separation of powers principles in the West Virginia Constitution.”

Workman also argued that the judicial branch has the sole authority to regulate the conduct of judges. She says impeachment Article 14 usurps that power.

She said she realizes the Legislature possesses “the sole power of impeachment.”

“However, the sweeping authority granted to the Legislature through the Impeachment Clause is limited by the requirement that impeachment proceedings comply with the law,” Workman argued.