Another attempt to impeach Loughry could happen next week; Workman possibly as well 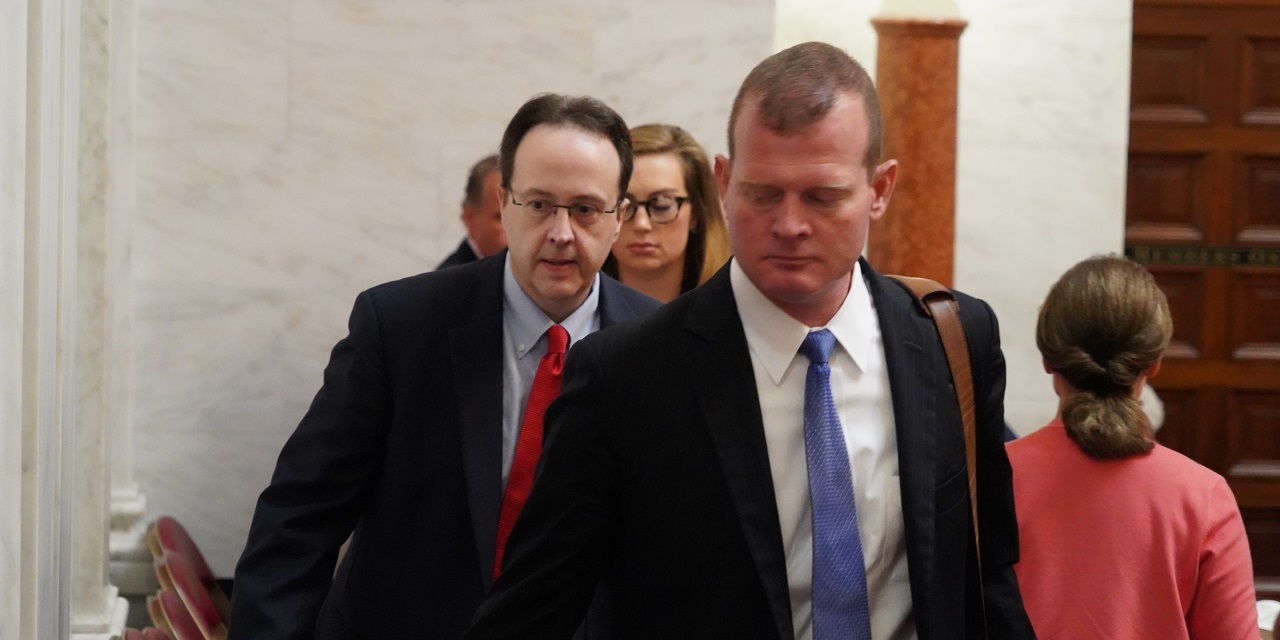 CHARLESTON – A new impeachment article against convicted and suspended state Supreme Court Justice Allen Loughry could be in front of legislators by next week.

The new article would focus on Loughry’s federal conviction on 11 counts of wire fraud, mail fraud, witness tampering and lying to federal agents.

“That’s up to the governor,” Hanshaw told host Hoppy Kercheval, adding that the impeachment of Loughry based on the federal conviction could be fairly quick.

Chief Justice Margaret Workman might be included in that new call for impeachment as well.

State Senate President Mitch Carmichael said he and Hanshaw sent a letter to the governor’s office requesting the call for a special session. He said they asked Justice to call the special session for Tuesday, Nov. 13 during the interim meetings.

“We sent a letter down asking for him (Justice) to call the special session for Tuesday for Loughry and (Chief Justice Margaret) Workman,” Carmichael told The West Virginia Record. “Now, the governor’s office may or may not want to do both of them. You’ll have to ask them that, I guess.”

Carmichael said those two were included in the letter based on the notion that the House of Delegates had messed up procedurally before, leading to Workman filing a motion to have her first impeachment trial stopped.

Chief Justice-elect Beth Walker already had her trial in the state Senate and was acquitted. Before her September trial was scheduled to begin, Workman filed a motion to have her impeachment halted. An acting state Supreme Court ruled in favor of Workman, basing the decision on constitutional and procedural grounds such as the House of Delegates not following proper procedures during the impeachment proceedings. The same acting Supreme Court later issued an order saying that ruling extended to retired Justice Robin Jean Davis and Loughry as well.

“It’s all in the context of the notion that the House did this wrong,” Carmichael said. “Any call should be issued should include the same justices that were on the same call. But, Beth Walker already has been tried. She went through the process. And Robin Davis has resigned, so I don’t see how she could be included in it now. Unless it’s based on the fact that she’s now a senior status judge.”

“It potentially could be,” Carmichael said. “I will say that my view on it is that, as a juror, I’ll have to hear all of the evidence. But from a procedural standpoint, it probably can be tried and handled all in a day.”

In the letter signed by Carmichael and Hanshaw, the legislative leaders detail what has happened so far with the Court of Impeachment.

"The Senate has been informed by the Supreme Court that their designated presiding officer for the Court of Impeachment, Acting Chief Justice Paul Farrell, will not attend or preside over any further proceedings," they wrote to Justice. "Without a presiding officer from the Supreme Court, the Senate cannot fulfill its constitutional authority to act as a Court of Impeachment."

Carmichael and Hanshaw say lawmakers continue to evaluate "all available legal options to address the many fallacies contained" in the ruling that halted Workman's impeachment trial as well as those for Davis and Loughry.

Then, they ask Justice to call the governor to issue a call for an Extraordinary Session for noon on Nov. 13 "for the purpose of considering new Articles of Impeachment against convicted felon Justice Allen Loughry and Chief Justice Margaret Workman."

"This Extraordinary Session can run concurrently with previously scheduled November interim meetings, ensuring minimal taxpayer expense," they wrote. "As it currently stands, a convicted felon sits as a member of the state's highest court. Therefore, the timing and urgency of this issue is obvious.

"If the House adopts Articles of Impeachment, the Senate stands ready, willing and able to receive the Articles and to properly and efficiently resolve the matter at a Court of Impeachment."

Farrell told The Record he wasn't aware of any potential special session.

"I have no plans to be at the Capitol on Tuesday," said Farrell, who is a Cabell Circuit Judge. "I have a full docket in Huntington."

"I’m unsure why the Senate is calling for a special session and implying guilt on the part of any justice since they are required by our Constitution to be impartial arbiters of any charges brought by the House," said Williams, who is the managing partner of the Huntington office of Nelson Mullins Riley & Scarborough.

The latest federal filing doesn’t replace the motion his attorney filed last month. The earlier one was sealed, but the new filing says it adds to issues mentioned in the earlier one.

“Because the evidence introduced in this case is insufficient even in the light most favorable to the United States to sustain a conviction of the specified counts, the defendant respectfully requests that this court enter a judgement of acquittal on these counts, and order a new trial on any remaining counts,” the Nov. 6 motion states.

Last month, the state Judicial Hearing Board scheduled a hearing for Loughry for Jan. 14 after lifting a stay. The board had issued the stay pending Loughry’s federal trial. On the same day, the state Judicial Investigation Commission amended its formal charges against Loughry to include the federal convictions.

Walker already had her trial in the state Senate and was acquitted. Workman filed a motion to have her impeachment trial halted. An acting state Supreme Court ruled in favor of Workman, basing the decision on constitutional and procedural grounds such as the House of Delegates not following proper procedures during the impeachment proceedings. The same acting Supreme Court later issued the order saying that ruling extended to Davis and Loughry as well.

If Loughry’s motions seeking a new federal trial are unsuccessful, his sentencing is scheduled for Jan. 16, just two days after his hearing before the state Judicial Hearing Board.

Despite his federal conviction and suspension, Loughry still is technically a member of the state Surpeme Court.

But last month, Justice said he thought Loughry should resign.

“I wish to goodness that Judge Loughry would just do what seems to be the right thing,” Justice said Oct. 22 during a press conference. “It just seems the right thing is resignation and go on down the road.”

During that press conference, Justice said he wasn’t ready to call the House back into special session yet to deal with the issue then.

“I think it would be horribly unfair for me to intervene prior to the House and Senate not working through their situations. And that’s what they need to do. And they will, because they’re really good.”

Justice said what he hates most about the entire situation is how it’s drawing unwanted attention on the Mountain State.

“What I hate about it more than anything is it puts a national eye on West Virginia that’s not good,” Justice said. “Don’t get me wrong, I don’t begrudge in any way the reporting of what we’re talking about. I’m not saying that. I’m not saying that at all. But, I’m just cautioning all of us … we need to stay with the facts. Because every day that this continues on, and it has embarrassed West Virginia, and it has hurt West Virginia. And every day it hurts us until it’s over.”