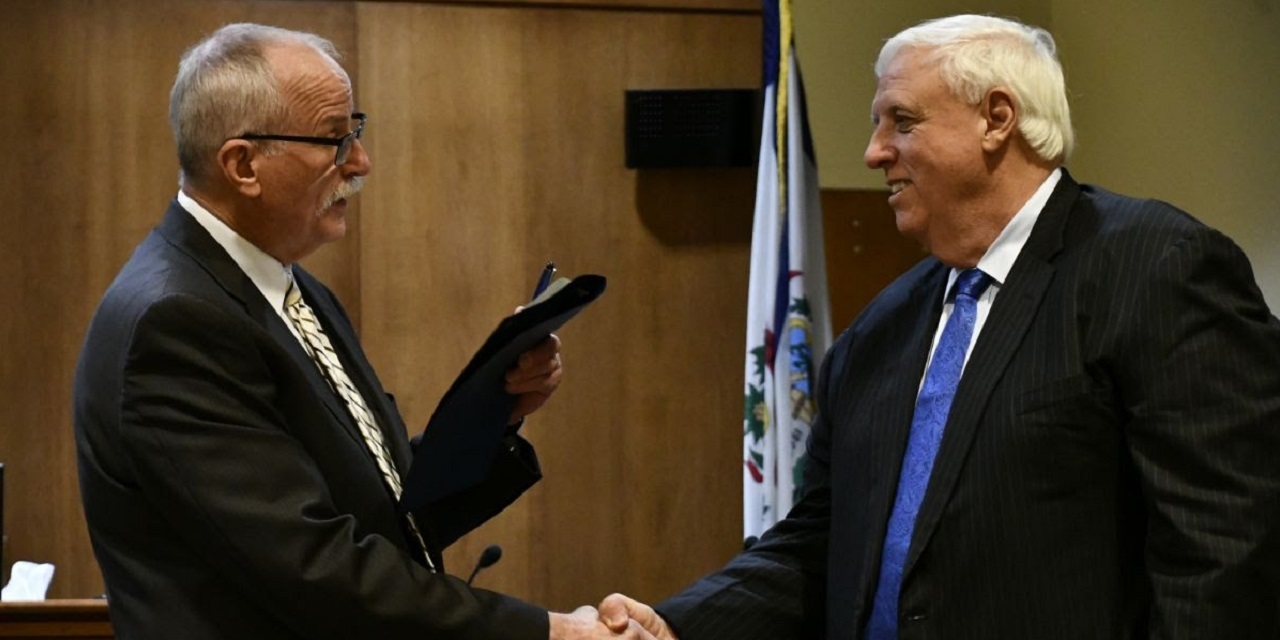 CHARLESTON – Members of the state Supreme Court and others are praising the appointment of John Hutchison as the state’s newest justice.

On Dec. 12, Gov. Jim Justice named Hutchison as the newest member of the state Supreme Court. Hutchison, who has been a circuit judge since 1995, is taking the seat of convicted former Justice Allen Loughry. He will serve on the Court until the May 2020 election, at which time he can run to retain the seat until the end of Loughry’s term in 2024.

“Judge Hutchison is one of the most experienced and respected circuit judges in West Virginia,” Chief Justice Margaret Workman said. “I applaud the governor for making such a wise choice.”

“I congratulate Judge Hutchison on his appointment, and I’m excited about the vast experience he will bring to the court,” Walker said. “He will be a great help in our efforts to improve transparency and accountability at the court.”

“I have a good working relationship with Judge Hutchison from my days as Speaker of the House of Delegates,” Armstead said. “He, with other judges, often represented the judicial association in meetings with legislators about issues involving circuit judges. I look forward to continuing to work with him, now as a colleague.”

“I congratulate the governor on choosing an outstanding candidate,” Jenkins said. “Judge Hutchison will bring years of judicial experience to the Supreme Court, and I look forward to working with him.”

A former candidate for the Court said Hutchison is a good choice.

“Judge John Hutchison is a good friend, experienced judge and I am happy to have someone with strong judicial experience appointed to the Supreme Court," Eastern Panhandle Circuit Judge Chris Wilkes said.

The president of a state group for trial attorneys said Hutchison will bring fairness to the Supreme Court.

"Judge John Hutchison is a dedicated jurist who believes in justice for all," said Stephen New, president of the West Virginia Association for Justice. "His appointment to the West Virginia Supreme Court will help ensure that all litigants who appear before the court will have a fair appeal.

"Judge Hutchison brings more than 20 years of judicial experience to our state's highest court, and he is well respected by attorneys throughout West Virginia. As a Beckley attorney, I have appeared before him regularly. He is a hardworking and balanced judge whose service on the bench has been above reproach.

"He will bring this same commitment to his new role as a justice on the West Virginia Supreme Court."

“Throughout his winning campaign, one of the ways President Trump pledged to ‘Make America Great Again’ was to bring to our courts constitutionally conservative judges who hold the word of law sacred and would not legislate from the bench,” Carmichael, a Republican, said. At every opportunity and with every judicial nomination, President Trump has kept his word and delivered on his promise. As a result, our United States Supreme Court along with the entire judicial branch of government has grown stronger because of his judicial selections.

“After his outstanding initial judicial appointments, I had a great deal of optimism that Governor Justice would continue down the same path as President Trump. The citizens of West Virginia are profoundly and acutely aware of the negative impact that a single judge can have on the confidence of the judicial branch and upon the citizens of our state. When provided the opportunity, President Trump never misses the chance to improve the judicial branch with known and proven constitutionally conservative legal minds.”

Carmichael also praised Putnam County Prosecutor Mark Sorsaia, who was one of five on the short list of applicants given to the governor by the state Judicial Vacancy Advisory Commission.

“While I am confident that Judge Hutchison is a man of honor and integrity, I am absolutely positive that Mark Sorsaia is a man of incredible legal credentials and a constitutionally conservative judicial philosophy,” Carmichael said. “He would have been an outstanding Justice of the Supreme Court of Appeals of West Virginia.

“Mr. Sorsaia has spent a career protecting the families of Putnam County as their prosecuting attorney and has devoted himself to countless charitable efforts throughout his community. Perhaps most notable, he is a person who has shown tremendous fiscal responsibility in his tenure as prosecutor – a quality needed now more than ever.”

“I deeply encourage him to prayerfully consider the progress West Virginia has made as a state in recent years in terms of our legal and economic climate as he considers his rulings,” Carmichael said. “We have come too far to allow any activism from the bench to unravel the hard work of so many.

“If future judicial appointments are forthcoming, I encourage Governor Justice to return to the promises and philosophy to which President Trump adheres insuring that constitutionally conservative judicial philosophy is advanced.”

“John Hutchison was the judge on the bench the very first time I appeared in court as a lawyer," House Speaker Roger Hanshaw said. "I'll always remember that he took the time to make a new lawyer feel comfortable when he certainly didn't have to.

"I applaud Governor Justice on a wise appointment and am looking forward to seeing now Justice Hutchison on the bench at the high court.”

“He is very knowledgeable in the law, and he cares deeply about the responsibilities of the judiciary to the citizens of this state," Trump said. "As a circuit judge he brings with him a wealth of knowledge and experience in the administration of justice in the lower courts of the state.

"I am confident that he will work very hard to restore public trust in out Supreme Court.”

“During his service on the bench, Judge Hutchison has proven that he has the ideal judicial temperament, consistently demonstrating decisiveness, patience, courtesy, open-mindedness, compassion and commitment to equal justice," Shott said. "I am supremely confident he will serve our state well on the Supreme Court of Appeals.”

Other state Republican leaders welcomed Hutchison to the Supreme Court.

"Congratulations to Judge John Hutchison on his appointment by Governor Jim Justice to the Supreme Court of Appeals of West Virginia," WV GOP Chairwoman Melody Potter said. "He brings decades of legal and judicial experience to the bench.

"This appointment by Governor Justice is an important step in restoring faith in our state's judicial branch of government."

"Governor Justice has appointed someone who will serve with honesty and integrity," Larry Pack said. "I applaud Governor Jim Justice for this highly qualified appointment and congratulate Judge John Hutchison."

On Dec. 11, the JVAC sent the governor a list of five people it recommends for the opening on the state Supreme Court.

The JVAC interviewed 15 people Dec. 11 for the position. Seventeen had applied, but two (Charleston attorneys Greg Chiartas and Rusty Webb) withdrew their names for consideration before the interviews. They applied for the vacancy created by the resignation of convicted former Justice Allen Loughry.

Six of those applicants – Carlton, Douglas, Frank, Long, Schwartz and Tabit – were on the ballot last month for two seats on the bench. Tim Armstead and Evan Jenkins, both of whom already had been appointed by Gov. Jim Justice, won those elections.

Hutchison and Tabit currently are circuit judges in Raleigh and Kanawha Counties, respectively. Hutchison is a longtime personal friend of Justice who delivered the oath of office when Justice was inaugurated in 2017. Tabit received the highest number of votes behind Jenkins and Armstead in last month's Supreme Court races.

Douglas is a Kanawha Family Court Judge. Rowe is a former circuit judge in Greenbrier and Pocahontas counties who is working as Senior Status Judge in Nicholas County. Sorsaia is Putnam County's Prosecuting Attorney. Wooton is a former legislator.

Earlier this year, the JVAC conducted interviews to fill the Supreme Court seats of retired Justices Menis Ketchum and Robin Jean Davis. In August, the commission interviewed a total of 13 candidates for the two vacancies on the court. They recommended a total of nine names (four for one vacancy, and five for the other) to Justice.

Loughry resigned last month after he was found guilty on 11 federal felony counts of wire fraud, mail fraud, witness tampering and lying to federal agents. He faced impeachment before his resignation, and he still must go before the state Judicial Investigation Commission to answer charges of 32 counts of misconduct.

His federal sentencing is scheduled for January.