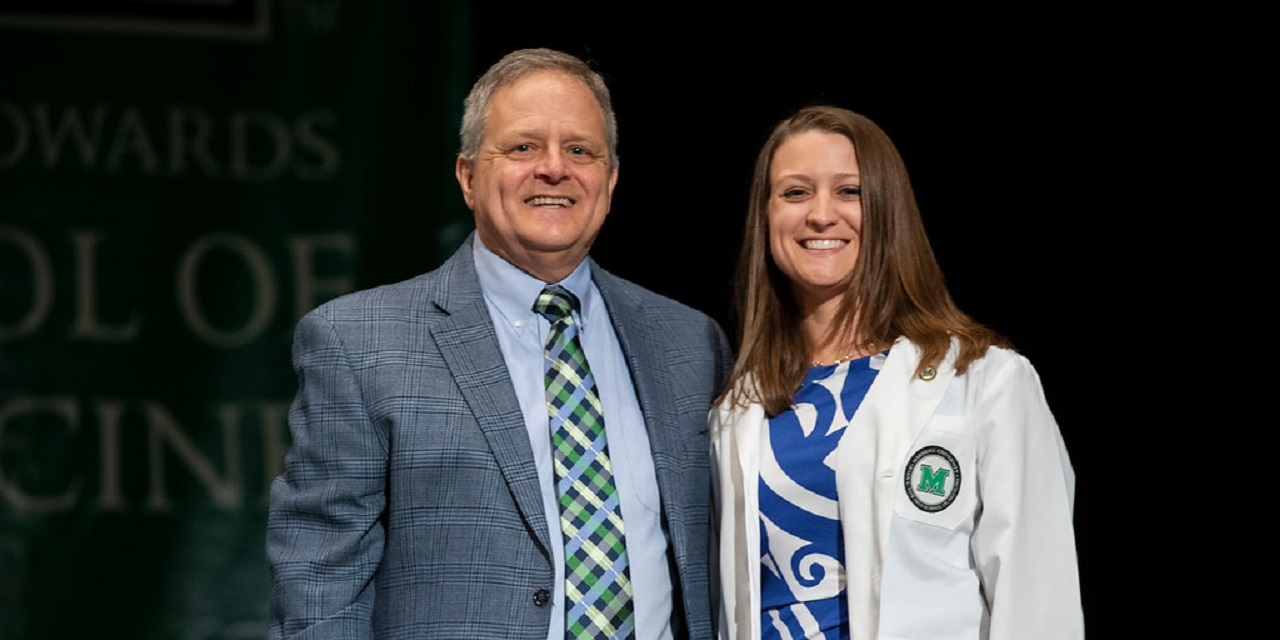 Erin Shaver's father Mitch, a Huntington physician, presented her with her white coat.

HUNTINGTON – At a recent ceremony, the Marshall University Joan C. Edwards School of Medicine welcomes its newest class of students during its annual White Coat Ceremony.

The students among the Class of 2023 come from a variety of backgrounds, including a national champion baton twirler, a former coal miner and a few former college athletes.

“Most of what I did as an attorney was health care litigation,” said Shaver, who also is a Huntington native. “As I went on, I really began to enjoy the medical aspect of the job instead of the actual legal work. The medicine part was fascinating to me.”

Shaver, 29, worked at Farrell, White & Legg after graduating from Washington & Lee’s School of Law in 2015. She received her undergraduate degree in public relations from Marshall’s W. Page Pitt School of Journalism & Mass Communications in 2012.

“The lawyers at my firm and my family were really supportive,” Shaver told The West Virginia Record. “They said now is a great time to give it a shot if you want to try medical school.

Shaver stopped working at the firm in 2017 to prepare for medical school. She now is looking at four more years of classes and three years of residency.

“I’ve made a bit of a commitment, but I’m pretty excited about it,” she said.

There are attorneys with medical degrees. A notable local one is Charleston attorney Dr. Richard Lindsay.

But, Shaver said she plans to focus solely on medicine.

“There are ways for me to use my knowledge about law and the legal aspects of the healthcare system, especially if I work at a university and do research,” she said. “I have no plans to practice law, but it’s always available to me.”

Shaver said her plan is to eventually practice family medicine or some form of primary care in the Tri-State area.

But, she also knows plans change … such as when an attorney realizes she wants to go to medical school

“I didn’t plan to work at a law firm and work as a trial attorney when I started law school,” she said. “But, it (Farrell, White & Legg) just felt like such a great place. Even though it wasn’t what I initially planned to do, I knew I’d be happy there.

“And, it surprised me that it led me to realizing I wanted to go to medical school.”

Sheanna Spence, director of external affair for the School of Medicine, said the newest class of students includes alumni from Georgetown, Ohio State, Kentucky, West Virginia and many others. She said it also includes eight legacy students, meaning one or both parents are Marshall School of Medicine alumni.

Shaver is one of those legacy students. Her father Mitch Shaver is a 1990 Marshall School of Medicine graduate. He now practices family medicine at Marshall. He also works in sports medicine, primarily for the Thundering Herd men's basketball team.

Despite growing up around medicine, Shaver said she never considered med school until a few years ago.

"I have two younger brothers who went to the School of Medicine at Marshall," Shaver said. "They're doing their residencies in Ohio now. And, they always knew they wanted to do something in medicine. My mom went to journalism school, so I was doing more of what she had done. But, my entire family was helpful when I started transitioning from law to medicine."

In addition, 79 percent of the class are West Virginia residents, 44 percent are females and 88 percent were science majors. The average age of the students is 24 years old.

Marshall’s White Coat Ceremony started in 1996. Incoming students receive their first white coats, stethoscopes and medical instruments. It is considered a rite of passage for first-year students and is designed to instill the values of professionalism, humanism and compassionate care.

Since 2006, the Touma family – including Joseph B. Touma, M.D., a retired ear, nose and throat specialist and former chair of the Marshall University Board of Governors, and his wife, Omayma T. Touma, M.D., retired medical director of the Cabell-Huntington Health Department – have donated funds to provide each student with a stethoscope. Their son, B. Joseph Touma, M.D., presented the gifts during the ceremony. And, more than 115 School of Medicine alumni, family and friends sponsored the white coats and medical instruments for the Class of 2023.