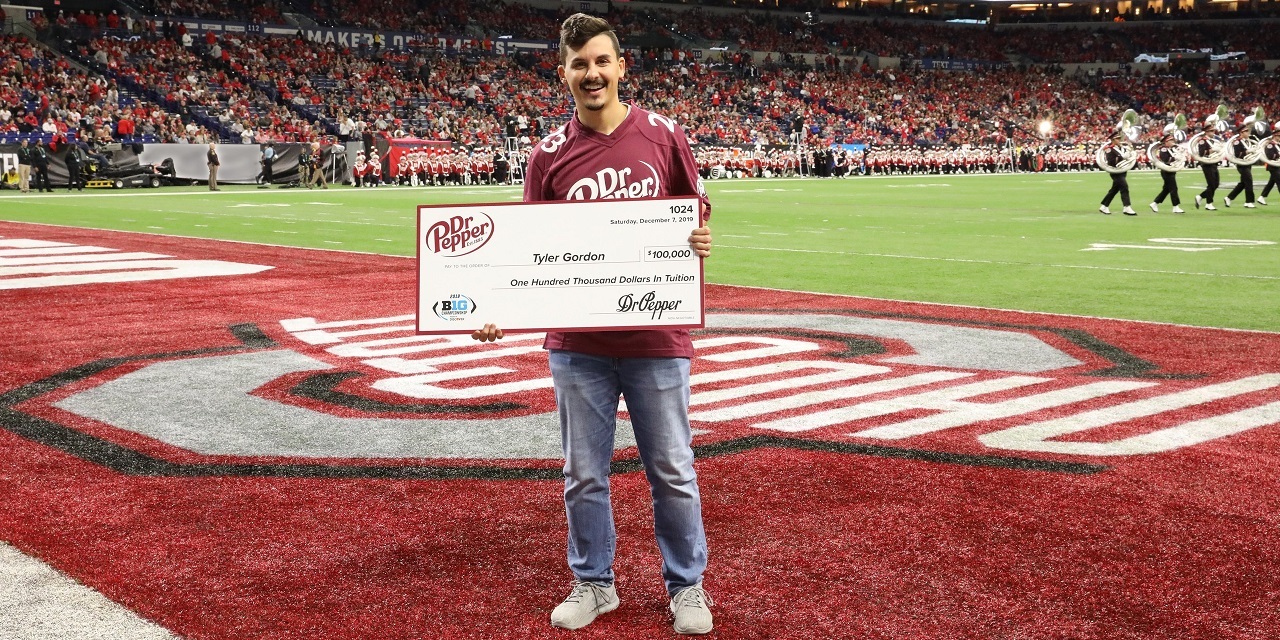 MORGANTOWN – A West Virginia University law student will be able to pay off most of his student debt after winning $100,000 in the Dr Pepper Tuition Giveaway during the Big 10 championship game.

Tyler Gordon, a third-year College of Law student, toss 20 footballs into a giant Dr Pepper can in 30 seconds to defeat a University of Oklahoma student for the prize.

“This $100,000 means the absolute world,” Gordon told The West Virginia Record. “My wife and I got married in June. She’s hoping to go to grad school. She just graduated from Concord, which is where I did my undergrad.

“Being able to start off life without that burden of student loans has meant the world to both of us. I actually came to WVU with no scholarships. I was in an immense amount of debt. It doesn’t cover all of it, but it covers most of it.”

Gordon, who grew up in Sophia in Raleigh County, applied for the contest in August. About a month ago, he learned he had been selected.

“Within a couple of days, my dad – who is a handyman – had a replica can built for me to start practicing,” Gordon said. “He was almost as excited about it as I was.

“I went home to pick it up, and Independence High (Gordon’s alma mater) loaned me eight footballs to practice with. I got eight more from Woodrow Wilson High School. I hauled all of that back up to Morgantown and started practicing.”

Gordon said he practiced at least an hour a day during the weeks leading up the Dec. 7 event, which took place at halftime of the Big 10 Championship game in Indianapolis between Ohio State and Wisconsin.

“I saw that someone online said at least WVU finally beat Oklahoma in something involving football,” Gordon joked. “But seriously, it’s been a blast. It’s been a whirlwind for sure.”

Gordon grew up playing football, but he played golf and tennis in high school.

“I grew up a football fan. And I still am, so it wasn’t too new to me,” he said. “I played around with throws the first few days to see what naturally was more accurate. With an overhand throw, even if you’re accurate it takes too long. I had to find something that worked quicker. That chest pass is the fastest.”

Gordon said he has a job lined up after he graduates from law school with Thomas, Combs & Spann in Charleston.

“I’m really excited about that,” he said. “And one day, after I build up my resume, I hope to go to the U.S. Attorney’s office to work. I want to focus on helping combat the opioid epidemic.

“I’m excited for the job I have lined up. But this money means my wife and I will be able to pursue our passions without constantly having that fear of these loan payments to make. It changes everything.”

He said Dr Pepper asked the contestants to not talk much about the contest beforehand.

“Dr Pepper didn’t really want us telling people until a few days before,” Gordon said. “A close group of friends knew. But once everyone at school figured it out, they’ve all been supportive.

“This week is finals week. When I walked back into school Monday, it was almost a mistake going to school to study. Everybody stopping me to talk about it. Southern West Virginia certainly doesn’t prepare you for all of this.

“It’s finals week, and I’m playing catch up for sure. But everyone here has been extremely supportive.”

Dr Pepper has provided college students with more than $10 million in tuition through the program, including $750,000 this weekend.

“Dr Pepper has a long-standing commitment to college football and its fans, and this program demonstrates that dedication by enabling students to pursue their academic goals,” said Derek Dabrowski, Vice President of Brand Marketing for Dr Pepper. “We are incredibly proud of this year's winners and we can't wait to see how they will impact the world around them."