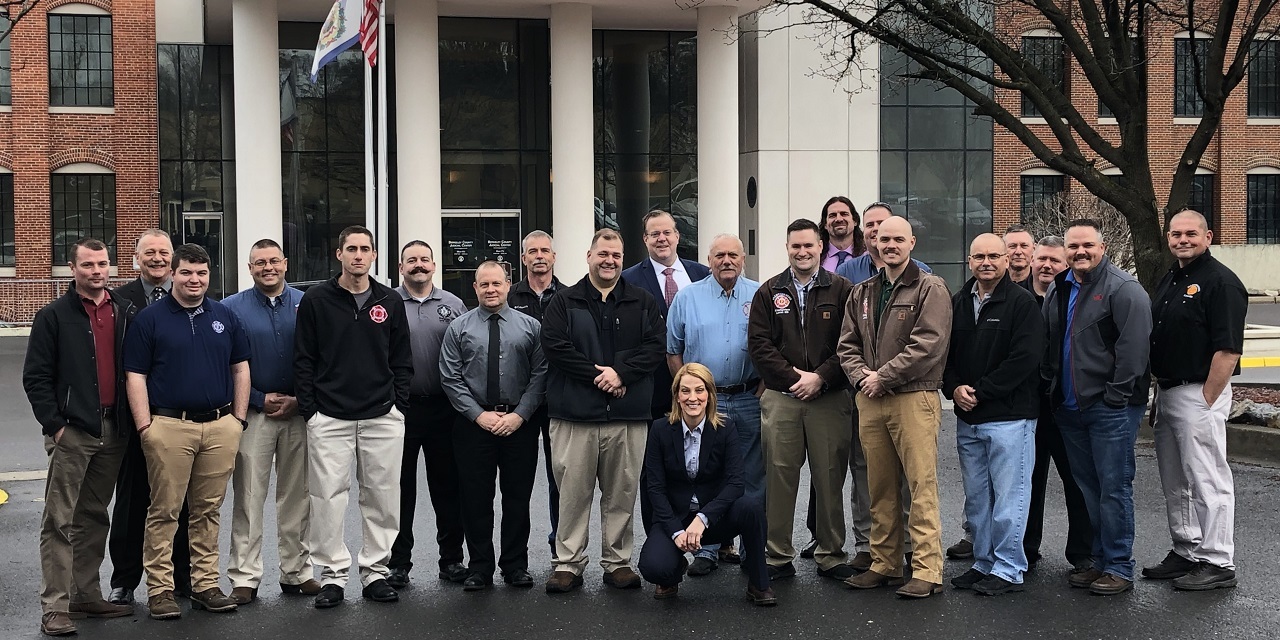 MARTINSBURG – A Berkeley County judge has ruled that Martinsburg firefighters are not being properly paid for holidays.

On Feb. 25, Circuit Judge Laura Faircloth granted a motion for summary judgment in a case filed by union members of the Martinsburg Fire Department. Faircloth said the city should be paying the firefighters either time and a half for their 24-hour shift whether they work the holiday or not or providing them with comp time for the holiday.

The courtroom was packed with Martinsburg firefighters, families and supporters.

Faircloth did not grant the firefighters’ motions regarding salary adjustments and claims of retaliation.

“This is an important legal victory for career firefighters in Martinsburg and statewide,” Toriseva told The West Virginia Record. “The judge affirmed that all paid firefighters in West Virginia must either be paid 36 hours (time and a half) or be provided 24 hours off in the future, whether they work the holiday or not.

“The City of Martinsburg was doing it wrong, and after the members of the IAFF 805 sued them in June of 2018, the city retaliated by actually lowering firefighter holiday pay even further. Now we proceed to trial to determine the full damages for the city’s failure. We will also present evidence at trial about the city’s retaliation and the “so-called” salary adjustment.”

Tuesday’s ruling was another legal victory for firefighters across the state in recent months.

Last month, Charleston City Council unanimously approved a $1.7 million settlement between the city and its firefighters' union to correct a pay inequity that has been taking place since 2012.

Mayor Amy Shuler Goodwin and Myron Boggess, president of the Charleston Professional Firefighters Local 317, announced the agreement at a Jan. 13 press conference. City Council voted on it Jan. 21 and also had the first reading of the resolution to fix the situation going forward.

“Our firefighters deserve to be paid fairly and in accordance with state law,” Goodwin said during the Jan. 13 press conference. “My administration has been working diligently with Charleston Professional Firefighters Local 317 for months to correct this problem made years ago and pay our first responders what they are owed.”

In 2011, Charleston City Council approved changes to how firefighters were to be compensated for holidays. The measure went into effect Jan. 1, 2012, but the firefighters had been paid incorrectly for holidays since then. That changed contradicted state law. The new agreement addresses the back-payment discrepancies and makes changes moving forward for future holidays that is in line with state law.

Toriseva, a Wheeling attorney also represented Charleston’s firefighters union, said Weirton resolved a similar situation with its firefighters last year. And in addition to the case in Martinsburg, she is representing firefighters in Morgantown and Parkersburg in similar cases. Despite settlement discussions in both, trials in both of those cases are scheduled for later this year.

Last week, the City of Morgantown passed a resolution providing firefighters with 24 hours of comp time for holiday work.

The Martinsburg lawsuit was filed in 2018 by more than three dozen current and retired firefighters alleging they were not properly paid holiday pay. It later was amended to add claims of retaliation and salary adjustment.

Mark Stroop is a lieutenant with the Martinsburg Fire Department and is president of the I.A.F.F. Local 805. He is the named plaintiff, and all 37 plaintiffs are members of the local. Three of the plaintiffs are listed as captains, six as lieutenants, 26 are firefighters and two are retired.

In addition to those original issues, the first amended complaint includes allegations that Martinsburg City Council introduced an ordinance Sept. 13 showing “disparate treatment of firefighters compared to all other city workers” regarding wage payment.

“Ordinance 2018-19 contains no clause related to retroactive application of the ordinance,” the amended complaint states. “Plaintiffs believe Ordinance 2018-19 was introduced and adopted in bad faith by defendant to further infringe upon the fair payment of wages to the plaintiffs and that the same was introduced and adopted as retribution directed toward the plaintiffs for filing this action.

“Ordinance 2018-19 arbitrary and contrary to equal protection guarantees contained in the Constitutions of West Virginia and the United States of America.”

The amended complaint says the city intended to apply the ordinance retroactively to apply to Labor Day this year.

“After the plaintiffs filed their lawsuit to recover their wages, the Chief of the Martinsburg Fire Department unilaterally instituted a policy changing the procedure related to firefighters and calling off sick,” the complaint states. “This policy requires a note from a medical professional if the firefighter takes two consecutive days of sick leave.

“Upon information and belief, no other Martinsburg city employee is subject to the same scrutiny when using sick time.”

“The department never had a sick leave policy,” the complaint states. “Plaintiff’s believe this is another attempt by the defendants to further ‘muddy the waters’ in terms of wages and paid time off to make the leave policy for the firefighters virtually impossible to understand and decipher if, in fact, they are accorded use of their leave in line with applicable statutory requirements.”

It also says the fire chief could “use this policy to further the disparate treatment of the members of his department compared to all other city employees who did not bring an action against the city.”

According to the complaint, none of the plaintiffs could waive any statutory holiday pay requirements for firefighters who actually worked the holiday.

State code says that if any member of a paid fire department is required to work during a legal holiday or if the holiday falls on the firefighter’s regularly scheduled day off, he or she shall be allowed equal time off at such time as may be approved by the chief or shall be paid at least time and a half.

According to the complaint, the firefighters – whether they worked a holiday or not – may have been paid additional pay for each holiday, such pay was “in addition to their regular pay.” They say Martinsburg didn’t pay them properly for the holidays.

They also claim that because they have a 56-hour work week, there is an established “regular rate of pay.” The firefighters say they are owed wages for “numerous holidays … some over a period of many years,” but they say they were not paid at the rate of at least time and a half. They also say when they worked overtime on holidays, they were not paid double time for the overtime hours worked.

In the complaint, the firefighters say Martinsburg police officers are paid properly when they work holidays and holiday overtime.

The new policy required firefighters to obtain a note from a medical professional before returning to work if the firefighter takes two consecutive days of sick leave.

“No other employee of the City of Martinsburg is subject to the same scrutiny when using sick leave, the latest complaint states. “The defendant, City of Martinsburg, continues to take retaliatory action against the plaintiff/firefighters for asserting their rights to payment in a willful, wanton, and/or reckless manner with malice and oppression toward the firefighters.”

“Only after the lawsuit was filed, firefighters were informed that their shift schedule would be divided into two days, 16 hour and 8 hour shifts, not a 24 hour shift.

“In retaliation for this lawsuit, the City of Martinsburg changed the sick leave time off compensation policy that had been in effect for over thirty years. The change negatively impacts the firefighters.”

The firefighters claim the city violated the state Wage Payment and Collection Act and negligently failed to properly pay the statutory holiday premium. They seek a motion for the appointment of a special commissioner “to calculate the holiday pay wages due each of the firefighters from their date of hire … to assess the costs” against the city. They also want the commissioner to “calculate the additional benefits due each firefighter.”

They seek compensatory damages, attorney fees, court costs and other relief. They also seek a stay of Ordinance 2018-19 and the chief’s new “sick time” policy.

Toriseva and Joshua Miller of Toriseva Law in Wheeling are representing the firefighters.