CHARLESTON — Because of an effort led by the West Virginia Access to Justice Commission, the bathrooms on the main floor of the West Virginia Supreme Court of Appeals are now fully accessible for handicapped individuals.

Duane Ruggier, a member of the commission, said the commission was set up in a way to make West Virginia courts more accessible throughout the state. 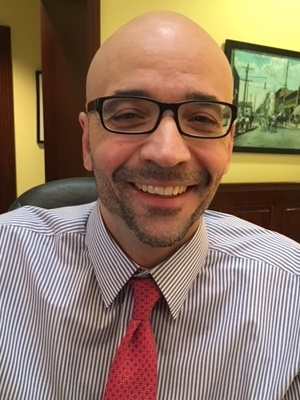 Ruggier, who has multiple sclerosis and uses a wheelchair, said if there is one place that should be accessible to all citizens, it should be the courthouse.

"There are so many important things that go on in the courthouse that all citizens should be allowed to participate in," said Ruggier, an attorney with Pullin, Fowler, Flanagan, Brown & Poe in Charleston. "All handicapped people are looking for — we're not looking for handouts or a free ride or anything like that — we want to do the three P's: we want to park, participate and pee."

"If you happen to have a van, like if you're in a wheelchair, you might need a special parking spot — a wheelchair accessible place," Ruggier said. "Then you've got to be able to participate. If you want to be able to serve on a jury, you have to be able to get into the jury room and the courthouse."

Ruggier said there need to be ramps and accessible pathways.

"All of these are requirements under the ADA," Ruggier said. "You want to be able to get to the circuit clerk's office or the family court if you're going through a divorce."

Ruggier said all of those things are basic parts of living in modern society and that handicap individuals should be allowed to participate in all aspects of modern-day life.

"And, you have to be able to get in the bathroom stall — it has to be big enough to get your wheelchair into it and back out of it," Ruggier said. "When I talk about the three P's, here's what actually happens with those individuals: If they can't park, and they can't pee and they can't participate, they don't go."

Ruggier said it's not that handicap individuals complain — they just don't go.

Ruggier said the commission was thrilled that the West Virginia Supreme Court agreed to and made the changes to their bathrooms.

"It takes a lot to actually do something and the Supreme Court should be lauded for actually doing it and making the changes and taking the steps that are needed because it's not that people what to actually discriminate against the handicapped, it's just that in order to make things accessible, it costs money sometimes and often folks don't necessarily want to spend the money to make things accessible to all," Ruggier said.

Ruggier said the Supreme Court did that and he and other handicapped individuals, the Access to Justice Commission and the West Virginia University College of Law were very pleased with it.

"We hope it will serve as a catalyst and an example to other courthouses throughout the state," Ruggier said.

Ruggier said the commission also plans to meet with the Supreme Court attorneys to discuss family courtrooms across the state.

"Family courtrooms in West Virginia are still under the purview of the Supreme Court, while the courthouses are through the counties," Ruggier said. "We want to talk about making them accessible. That means bathrooms and are their jury boxes that handicap people can get in."

Ruggier said if you can't get in the jury box, you can't serve on the jury.

Ruggier said the state has an aging population and as folks get older, they need walking assistance, whether it's a wheelchair, a cane or a walker.

"It's an issue that will be faced by almost everyone in their lives, which is why this is so important to us," Ruggier said.

The commission is based at the College of Law.

The restroom improvements at the West Virginia Supreme Court include adding grab bars and electronic door buttons and reconfiguring the facilities for wheelchairs.