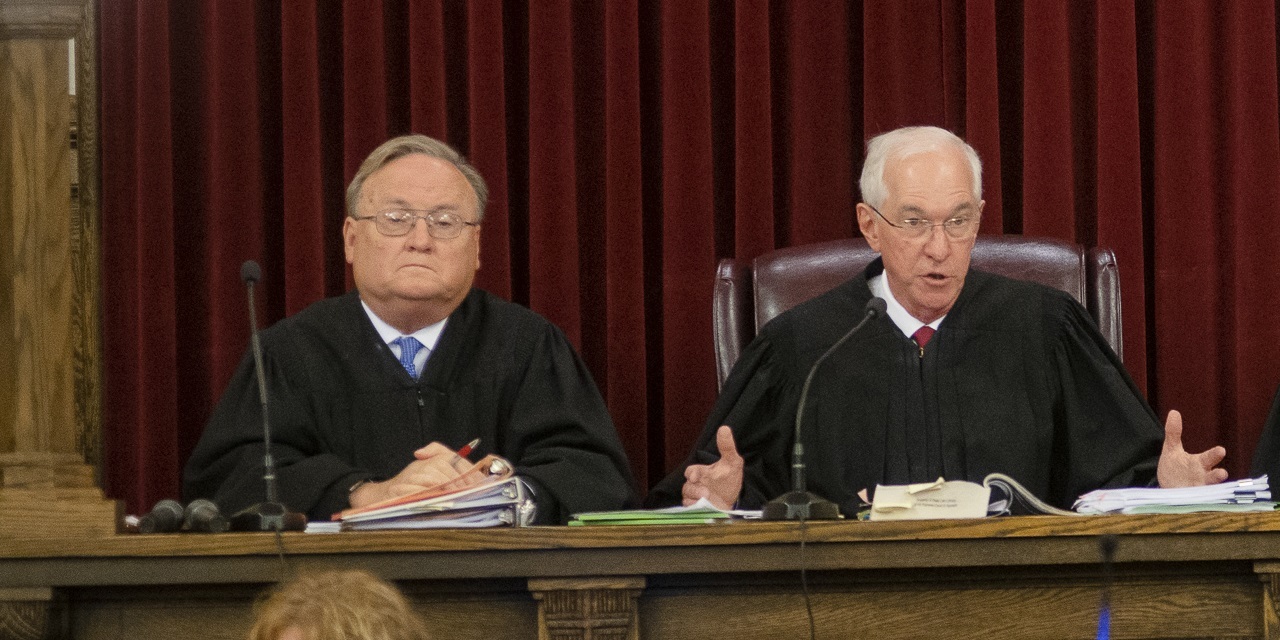 CHARLESTON – The trial for opioid cases before the state Mass Litigation Panel is scheduled to begin a little more than a year from now.

The president judges also urged all parties to talk about the issues and suggested trying to figure out a way to make the state MLP trial follow the example of the federal Multi-District Litigation involving the City of Huntington and Cabell County that is focusing on the public nuisance aspect of damages.

During a March 13 status hearing, Lead Presiding Judge Alan D. Moats said the trial would begin March 22, 2021. The hearing took place in the ceremonial courtroom at the Kanawha County Courthouse before Moats and Presiding Judge Derek C. Swope. Present were dozens of attorneys. More were allowed to listen remotely because of the Coronavirus pandemic.

“It’s great that we now have a trial date,” said Tish Chafin, one of the attorneys representing several city, town and county government subdivisions in the matter. “And, we’re going to work to get together with all parties, maybe even starting today, to work on what the panel is asking.

“It just makes sense. It’s clear this panel is going to defer to Judge (David) Faber (who is handling the Huntington and Cabell federal case) and his rulings.”

The lead counsel for the manufacturer defendants agreed.

“We are willing to sit down, use some common sense and do what Judge Moats has proposed,” Marc Williams, from Nelson Mullins' Huntington office, said during the hearing. “We’d be happy to sit down and try to come to an agreement.”

Referencing the Coronavirus pandemic, Swope joked about making sure the attorneys make sure they “have some social distancing.”

During the 80-minute hearing, Moats repeatedly mentioned leaning on Faber’s actions. That includes the scheduling the trial date so as to not interfere with the federal trial currently scheduled to begin in August.

“We want to come up with a reasonable timeframe to have a trial here,” Moats said. “And we need to work with Judge Faber. Nothing in our case is going to be in conflict timewise with his case.”

Moats also hinted that, like the federal matter, he and Swope “believe this is about public nuisance.” He said if there isn’t a laser-like focus on public nuisance, the case could go on for decades.

“This case has the capacity to outlast any case we (the MLP) have ever handled,” Moats said. “If we allow this case to languish for five years, 10 years, 15, 20 years, then that means we’ve let our legal system fail. And we’re not going to let that happen.

“How much does a case have to be before it collapses under its own weight? We are making this much more complicated than it really is. It’s going to take cooperation.

“We are going to focus on public nuisance. … We need to come up with a West Virginia solution.

Moats also said he doesn’t see the need for a lot of additional discovery.

He said the panel is going to allow discovery for one county, one city and one hospital. They selected Harrison County, its county seat of Clarksburg and United Hospital Center in Clarksburg.

“If we need to expand later, we will consider it,” Moats said.

In another effort to streamline the process, Moats and Swope said they will name Senior Status Judge Chris Wilkes to be the discovery commissioner for the case. Wilkes also was named special master in the federal case by Faber.

Moats also asked an attorney representing West Virginia Attorney General Patrick Morrisey's office if it planned to file any other opioid cases against any companies. Some cases originally filed by the AG – such as cases filed in Boone Circuit Court against Teva Pharmaceutical, Janssen Pharmaceuticals and Johnson & Johnson – recently were added to the MLP caseload.

The judges also reminded attorneys not to discuss private settlement negotiations. That followed a news story two weeks ago that included a proposed $1.25 billion settlement that was discussed during confidential meetings by 250 attorneys last month in Charleston.

Those talks apparently were the first time a state had broken out of national talks to work toward a settlement of all of the state and federal court opioid cases in one state.

Faber is handling the federal cases after the U.S. Judicial Panel on Multi-District Litigation agreed with Cleveland-based U.S. District Judge Dan Polster about sending the cases back to West Virginia for trial. Polster is overseeing the national opioid litigation.

There are about 400 West Virginia-based opioid lawsuits filed in state and federal courts by governments, individuals, hospitals and more. Nearly 300 federal cases became part of the MDL overseen by Polster, including the Cabell County and Huntington cases he remanded back to the Southern District of West Virginia. The nearly 100 cases filed in circuit courts across the state have been handed over to the MLP.