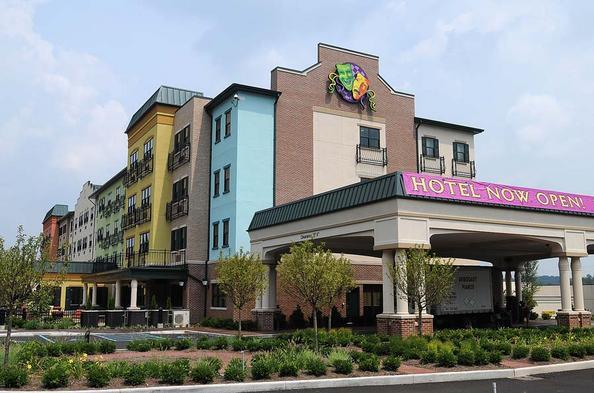 CHARLESTON – A 540-pound blackjack dealer was unsuccessful in his disability discrimination appeal before the state Supreme Court as the court found his obesity was not a disability.

The unanimous memorandum opinion affirming the Circuit Court of Kanawha County was filed on June 24.

Andrew O., the petitioner, whose full name was withheld by the Court due to the discussion of his medical records, was hired as a blackjack dealer by Mardi Gras Casino and Resort, the respondent, on April 29, 2010. Mardi Gras is owned by Racing Corporation of West Virginia.

The petitioner was required to wear a company-supplied uniform consisting of a long sleeved tuxedo shirt, a bow tie, an apron, and black pants. The casino also required the shirts to be tucked in with the sleeves buttoned at the wrists.

After encountering considerable difficulty locating a shirt to fit the newly hired dealer, the casino did find a shirt that could be altered to fit. However, according to the petitioner, the shirt did not fit in such a way to allow it to be tucked into his pants.

According to the opinion, soon after he began working for Mardi Gras, Andrew O. told his immediate supervisors that he was unable to walk to and from the designated employee break area during the allotted 25-minute break time. He claimed that he had shortness of breath and fatigue trying to negotiate the distance in the limited amount of time. His immediate supervisors allowed him to take breaks in an alternate area, the petitioner claimed.

Andrew O. also had difficulty standing for long periods and he supplied the casino with a note from his doctor that indicated that he needed to “sit down at work due to his weight condition.” In response, the casino assigned him a wheelchair-accessible blackjack table so he could sit while he worked.

On June 5, 2010, the petitioner’s direct supervisor gave him a written reprimand citing him for not tucking his shirt, for either concealing or not wearing his apron, and for having his shirt sleeves rolled up.

Andrew O. claimed that in response to this reprimand he contacted several supervisors and the human resources manager regarding his need for accommodations with his uniform. He further claimed that his direct supervisors assured him that he could continue to take his breaks in previously approved alternate areas.

Nevertheless, on June 12, 2010, one week later, he was given a second reprimand for taking breaks outside the designated areas. The casino claimed that the petitioner was taking breaks in public areas reserved solely for patron use.

On June 16, 2010, Andrew O. was suspended about an hour into his shift after coming to work with his shirt untucked and his sleeves unbuttoned, the opinion says. Following an investigation, the human resources manager terminated him for dress code and break area violations.

In response to his termination, Andrew O. filed a lawsuit for disability discrimination in circuit court pursuant to the West Virginia Human Rights Act. The court granted the casino’s motion for summary judgment on Sept. 10, finding:

(1) Petitioner was not disabled, in part, because obesity is not a per se impairment under the WVHRA, and in part because petitioner acknowledged that he was able to do everything that an average person was capable of doing.

(2) Respondent had legitimate and non-discriminatory reasons for terminating petitioner’s employment including ensuring uniformity of employees’ apparel; keeping employees on break away from respondent’s patrons; and proscribing incompetence and insubordination in its employees.

“On appeal petitioner first argues that the circuit court erred in finding that he was not disabled under the WVHRA. Petitioner argues that he is disabled under West Virginia Code § 511-3(m)(1) because he is physically impaired and his impairments substantially limit one or more of his major life activities. Specifically, petitioner argues that his morbid obesity, thyroid condition, and arthritis substantially limit his endurance while standing and walking and his ability to care for himself due to his difficulty in finding clothing to dress himself.

“Petitioner next argues that he meets the definition of disability under West Virginia Code § 5-11-3(m)(3) which defines ‘disability’ as ‘being regarded as having such an impairment.’ Petitioner argues that respondent’s accommodations or attempted accommodations on his behalf were indisputable proof that respondent regarded him as disabled. Respondent counters that it did not “regard” petitioner as disabled, but instead regarded him as an obese employee with limitations.

“In order to be protected by the WVHRA, a person must first prove he or she is a person with a ‘disability.’ The circuit court correctly found that the rules promulgated by the Human Rights Commission to assist in interpreting the WVHRA do not include “obesity” in the list of physical impairments that typically denote a particular disability.

“As for petitioner’s claims that he has a thyroid condition and arthritis, he does not contest respondent’s claim that he failed to provide any medical documentation regarding those conditions. Moreover, petitioner conceded at his deposition that he takes no medication for thyroid disease and that his doctor does not attribute his morbid obesity to any underlying health issue.

“Petitioner next argues that he was disabled under the WVHRA because his obesity, thyroid condition, and arthritis substantially limited him in a major life activity. However, as the circuit noted in its order on appeal, petitioner testified at his deposition that he was able to “do almost everything” the average person does, albeit at his own pace.

“Further, petitioner’s doctor’s note—regarding petitioners need to sit while he worked—did not indicate that petitioner was substantially limited in a major life activity. Given that respondent is entitled to a strong inference that discrimination was not a determining factor in petitioner’s termination, we find that the circuit court did not err in finding that petitioner was not disabled.

“In Stone v. St. Joseph’s Hospital of Parkersburg, we said that while federal disability jurisprudence may prove helpful in interpreting the WVHRA, the WVHRA ‘as created by our Legislature and as applied by our courts and administrative agencies, represents an independent approach to the law of disability discrimination that is not mechanically tied to federal disability discrimination jurisprudence.’ Therefore, the circuit court did not err in choosing not to apply federal cases interpreting the ADA or ADAAA to petitioner’s WVHRA-based lawsuit.

“Petitioner last argues that the circuit court erred in finding that respondent provided petitioner ‘reasonable accommodations’ with regard to his uniform and break area. As we have affirmed the circuit court’s conclusion that petitioner failed to make a sufficient showing that he was disabled or that respondent regarded him as disabled, we decline to address this issue... For the foregoing reasons, we affirm.”