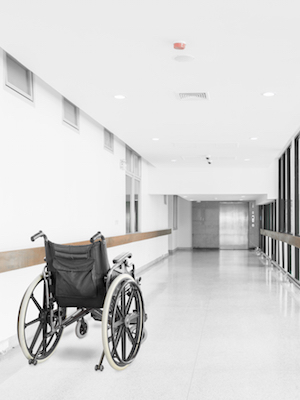 KINGWOOD – The legal representative of a woman is suing a health care facility over the alleged mistreatment of her while in its care.

A man filed suit Dec. 16 on behalf of his mother in Preston Circuit Court against Hopemont Hospital and John Doe.

On March 10, the plaintiff received a call from defendant Hopemont saying his mother had fallen out of her wheelchair and suffered injury, the complaint states. As a result, she was taken to Preston Memorial Hospital for treatment. While there, the plaintiff and his wife, a medical professional, noticed that his mother was incoherent and lethargic, the suit says. He also noticed an extensive amount of bruising on his mother that was unexplained.

The plaintiff asked the hospital to perform drug testing on his mother, which revealed she had high levels of opiates in her system. The hospital gave her Narcan to counteract the opiates and once it had time to work, the suit says she became agitated and hysterical, grabbing at her groin and screaming “get him off me.”

Subsequently, it was determined the plaintiff's mother had been raped while at the defendant Hopemont, the complaint states. Defendant John Doe is the accused rapist.

The counts against the defendant Hopemont is negligence and defendant John Doe of intentional assault and sexual battery. The plaintiff seeks judgment for damages, interest, punitive damages, court costs and attorney fees. A trial by jury is also sought.

The plaintiff is represented by Kevin Tipton of Tipton Law Offices of Fairmont. The case is assigned to Judge Lawrance S. Miller.