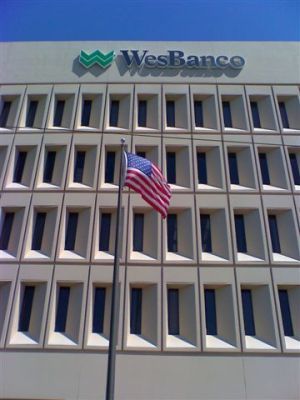 WHEELING — An Ohio County woman is suing WesBanco Bank, claiming that the company wrongfully released footage of her using an ATM in a way that falsely branded her as a criminal suspect.

Jamielee Thomas filed suit on Jan. 22 in Ohio Circuit Court against WesBanco Bank Inc. over claims that the bank was negligent, invaded her privacy, and damaged her reputation when it released surveillance footage of her.

Thomas claims that defendant, at the behest of the Belmont County (Ohio) Sheriff’s Office, negligently released ATM footage of her legally accessing the ATM and her account. The sheriff’s office was investigating the criminal misuse of a credit/debit card and automobile break-ins near the WesBanco location in St. Clairsville, Ohio.

The defendant company allegedly released the wrong footage — which showed the plaintiff legally and lawfully using the ATM — to law enforcement authorities. The suit says Thomas had used the ATM one hour prior to the illegal use that was being investigated. Because of what the suit refers to as the bank's negligent, intrusive, and dangerous act, surveillance images of the plaintiff were allegedly released to the public, authorities and news outlets for public scrutiny.

Thomas is suing for damages that would adequately compensate her for the injuries she incurred, including punitive damages; pre- and post-judgment interests, costs and attorney fees, and any other relief deem proper by the court. She is demanding a jury trial and is represented by attorneys David A. Jividen, Chad C. Groome, and Chad D. Haught of Jividen Law Offices PLLC in Wheeling.